Was the J.F.K. "Zapruder" film a forgery? 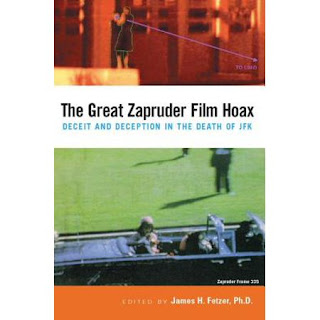 "The Great Zapruder Film Hoax: Deceit and Deception in the Death of JFK" by James Fetzer (2003)

Nothing in the past 100 years of USA history sparks more detailed analysis than the assassination of President John F. Kennedy.  Nearly every single associated item, person, place and topic that can be pored over has been pored over, with wildly varying results and levels of validity.  This book is by a university professor who took a deep interest in the assassination, and specifically brought his technical filming and photography knowledge to the analysis of the Zapruder film.  Everyone has seen this film as it was disseminated worldwide following the assassination.

Mr. James Fetzer makes the claim that the Zapruder film we all know is a forgery, created by the FBI to hide the true events of that day in Dallas, TX.  As a film historian and analyst, he brings to our attention many details that a non-specialist would never notice.
For one thing, the original Zapruder film was confiscated by the Dallas Police when Mr. Zapruder supposedly turned it in as evidence.  From there it was taken by the FBI, sent for processing to Kodak’s headquarters, and then released to the public later.  The original film has been “lost,” which is straight bullshit considering the primal importance of such a first-person recording of the event.  The film the FBI received back from Kodak and released days later to the media was edited severely, missing frames and whole sequences of frames, being cropped, and in other ways altered.  The question is raised as to why someone would do such a thing, and why, unless there was something to hide.
Much of the book deals with people and places that are peripheral to the film.  Eyewitness accounts collected by police and media in the days following the assassination, while consistent with each other, are not consistent with what the released Zapruder film shows.
Like all JFK related literature, this book has to deal in slightly vague terms, because government archives are still classified as top secret to this day, and the FBI will not allow their copies of the film to be viewed by anyone without the proper clearance.  Nothing the government does ever sheds any light on the topic and it just creates more and more issues.
Mr. Fetzer makes an extremely compelling case for the falsification of the original Zapruder film.  Until there is an actual release of the hidden files, it is up to people like Mr. Fetzer to try and understand what they can about this horrible event, and the reasons and meanings behind it.

( To read another review of this book from Assassination Research click here: http://www.assassinationresearch.com/v3n2/v3n2dellarosa.pdf )
Posted by Rob Instigator