Fighting the good fight against the Ignorant 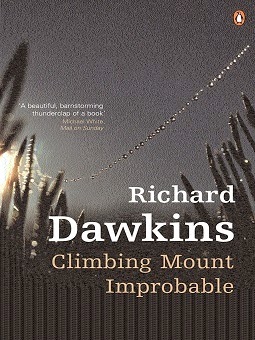 This book seeks to do something that seems near impossible, to show the lie behind “intelligent design” and to provide the actual science behind the theory of natural selection and the evolution of life.  So many people have a vested interest in keeping humans ignorant and subservient. Part of that is making sure that humans never forget that they are here on the whim of an omniscient creator.  Because so many adhere to this idea, they seek to poke holes in the theory of natural selection anytime they can.  They find one unexplained object/animal part and use it to try and destroy all that biologists, chemists, botanists and other life scientists have discovered and understood about the natural world around us.  Richard Dawkins spends this book showing how what seems to us to be physically impossible, doable only by a supernatural entity of some sort, is purely a result of our ignorance about how nature works.
One of the basic misconceptions that opponents of natural selection have is their idea of time scales.  A human life is lucky to last 100 years.  Most countries last barely 200 years, if that.  Human written history is barely 7,000-8,000 years old.  Our current species Homo sapiens sapiens, has trod upon the Earth for around 100,000 years.  Homo sapiens in some form has been around for over 500,000 years.  Most of the dinosaurs died out about 65.5 million years ago.  That is an insane number of years.  Even that is a tiny speck of sand when compared to the vast beach of time.  Life on Earth was solely composed of single-celled organisms for over 2.5 BILLION years.  BILLION!  It’s an inconceivable amount of time.  When people, ignorant AF and proud of it, state that there is no way natural selection could end up with a structure as complex as an eye, they betray their ignorance of time, not to mention biology.

There are many types of “eyes” in the animal kingdom.  From individual cells that detect photons, allowing a creature in the ocean to know what direction is up (sunlight) and what is down (darkness), to eyes composed of a patch of skin containing multiple sensor cells, able to detect shadowy shapes, to compound eyes composed of dozens of individual lenses, to the magnificent eye of an eagle, able to see miles away with telescopic vision, every type of eye exists on the Earth currently.  All are a result of natural selection over millions and billions of years.  Those who wish to refute this are willfully ignorant and therefore completely discredited in their worries.
The sad part is that our educational system does not provide these kinds of answers to our children, leaving whole generations ignorant, knowing just enough to understand very little except the vague, uneducated tripe they are fed by evangelists who believe the world was created 6,000 years ago and that all fossils are tricks planted by “god” to fool and test us stupid humans.  “A little education is a dangerous thing,” is a quote I read a long time ago and did not fully understand until I began to think about why people hold on to ignorance instead of seeking more and more knowledge.  Knowing just a little fools people into thinking they know enough to pass judgment.  I support Mr. Dawkins in his fight against the happily ignorant, who choose to force their ignorance upon the rest of us.

(This book can be read online here: http://www.evolbiol.ru/mount/index.html )
Posted by Rob Instigator