Until all humans have Liberty, none of us are truly free 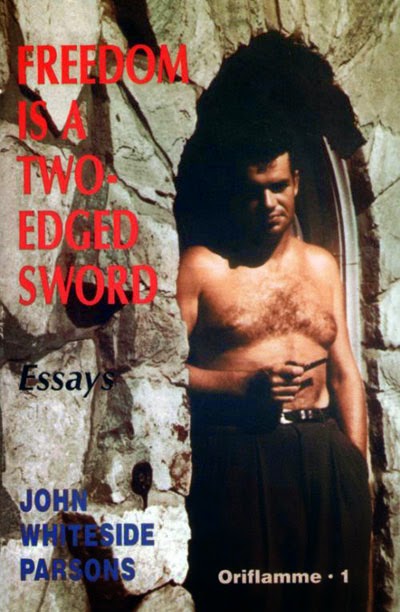 Mr. John “Jack” Parsons was one of the men most responsible for the Rocket Age, almost singlehandedly advancing the science of rocketry to the level that, just a few decades after his untimely death, led humanity to land on the Moon.  He was also a grade-A mystic, mingling with the Occult leaders of the day, including a long relationship with Aleister Crowley and his Ordo Templi Orientis, a “school” of magic which focused mostly on sexual magic techniques.
Freedom is a Two-Edged Sword is one of several treatises that Jack Parsons wrote in the 1940’s.  In it he discusses how freedom consists of a duality, using the metaphor of a blade “…of which one edge is liberty and the other responsibility, on which both edges are exceedingly sharp."  This duality was once fully accepted and worshipped, until the patriarchal religions of the world began to destroy it by tearing down the role of Woman, and her seemingly magical position as conceiver, bearer, birther and protector of LIFE.  Some of the most poignant language used by Jack Parsons is in the defense of the magic, the power of Woman.  That this was written in 1946, decades before the modern Feminist movement is a testament to his foresight.
Another large part of this treatise consists of the definition and description of true Liberty, as it applies to all humankind.  He discusses the false liberals who only want everyone to think as they do, but not to have the Liberty to think as they see fit.  He describes certain inalienable rights that are part of every human, and which are exceedingly worn away at by the fascist powers that be.  As Mr. Parsons puts it,

“Freedom is meaningless where its expression is controlled by powerful groups such as the press, the radio, the motion picture industry, churches, politicians and capitalists. Freedom must be insured.

It can only be insured by the allegiance to the principle that man has certain inalienable rights; among which are the rights:
·         To live his private life, insofar as it concerns only himself, as he sees fit.
·         To eat and drink, to dress, live and travel as, where and he will.
·         To express himself; to speak, write, print, experiment and otherwise create as he desires.
·         To work as he chooses, when he chooses and where he chooses at a reasonable and commensurate wage.
·         To purchase his food, shelter, deical and social needs and all other services and commodities necessary to his existence and self-expression at a reasonable and commensurate price.
·         To have a decent environment and upbringing during his childhood until he reaches a responsible majority.
·         To love as he desires, where, how and with whom he chooses, in accordance only with the desires of himself and of his partner.
·         To the positive opportunity to enjoy these rights as he sees fit, without obstruction on the one hand or compulsion on the other.
·         Finally, in order to protect his person, his property and his rights, he should have the right to kill an aggressor if necessary. This is the purpose of the right to keep and bear arms.”

It is amazing to think that this man was promoting these ideas over 60 years ago, and yet humanity as a whole has yet to achieve this.  There are parts of the world where this is all true, and even in those parts, the Liberty described is being slowly eroded by those who would seek to control the masses, instead of empowering them to be all they can be, as they so choose.

There may be a lot of esoteric, occult, mystical slants to Mr. Parsons’ writing but the core of it is a cry for humanity to respect itself, to love itself, and to include everyone as part of the human family.  His rage at those that seek to prevent this is evident in every word.  I will definitely be reading more!  I am in full agreement with Mr. Parsons that “…the liberty of the individual is the foundation of civilization.”  While many Americans are taught to seek and protect “freedom,” the real thing they should be seeking and protecting is LIBERTY.  Freedom is a value held inside one’s own mind.  You can be free inside and still be a captive.  What is actually needed is LIBERTY.  Liberty is a value of action.  You either have the liberty to live as Mr. Parsons outlined above, or you don’t.  Until all humans have liberty, none of us are truly free.

(This treatise can be read or downloaded in .pdf form here: http://www.bibliotecapleyades.net/bb/babalon210.htm )