The Eternals are eternally boring 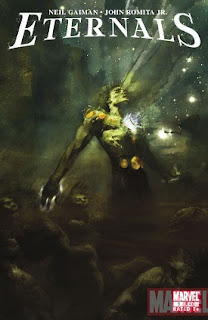 Have you ever anticipated great enjoyment of something and when you finished it, you thought to yourself, “Is that all there is?”  That was the case with this comic book mini-series written by Neil Gaiman, the master who gave the world the Sandman, American Gods, Neverwhere, and Good Omens.  How deflating!
The Eternals are a group of characters created by comic book legend Jack Kirby in the mid 1970’s. Mr. Kirby created many of the most iconic characters in comics, but the Eternals were never as popular or interesting as others in his portfolio.  I had hoped that Neil Gaiman would invigorate this tale, but no dice.
I am not sure if the problem lies in that the basic tropes used by Kirby/Gaiman in The Eternals have been used many times before and since, or if it is just not that engrossing an idea.  Follow this: a race of gods, or god-like beings, called the Celestials, created a race of Eternals and a race of Deviants, and created the Earth as we know it.  The Eternals are supposed to protect the Earth, while of course, the Deviants want to destroy the Eternals and Earth and everything.  The Eternals are essentially immortal.  Humans are ignorant of the entire thing.  I just bored myself shitless.
The basic ideas for this were drawn from the 1960’s hokum of Von Daniken’s Chariot of the Gods and all the nonsense that ensued after that regarding some alien race that came to Earth and “made” humans by genetically altering the existing primates.  The Eternals also sank Lemuria, and Atlantis (of course) and were a part of every stupid-ass mythological event in Earth’s past. The sad part is that neither Kirby nor Gaiman expand on these ideas very much.  The story in this particular series is so plain.  It involves a sleeping celestial, who has been woken and could destroy the Earth.  Same ol’, same ol’.  Boring.
The artwork for The Eternals is handled by John Romita Jr., an excellent comic book artist, and his work is the best part of this book.  The images do show the grandeur and behemoth size of the Celestials and are quite beautiful to look at.  It is a shame that the story attached is such a weak one.  The Eternals as a comic book entity have always been third-rate.  They are used in other Marvel series as the enemy/friend of the month, and because of this I do not see how anyone could develop any attachment to these characters.  They are all essentially boring superhero stereotypes.  One is impervious to pain, one is fast, one can mess with people’s minds, etc. Blah, blah, blah.
I have read everything I can find written by Neil Gaiman, and this is the dullest.  You let me down dude!
Posted by Rob Instigator