Maybe Mr. Campbell was running out of steam? Or, maybe I just do not care enough. 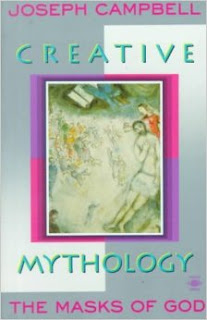 Mr. Joseph Campbell, having explored the origin of Human Myth, its development into codified rules for tribal group living, and then its growth into state religions and universal world religions, now analyzes the creation of the most enduring myth of the last 500 years.  That myth is the idea that Love, romantic Love, can and does allow for communion with the divine in all things, and that it happens purely on the individual level, without the involvement of religion’s rules or the meddling of a priestly class.
As one can imagine, this idea was very dangerous to the status quo religions acting as if they were the supreme arbiters of what was divine and who should rule on Earth.  Without their claim that they (religions) are the only source of divinity and the only way to petition the divine, organized religion stood to die a quick death, for very little in religious experience actually moved a worshiper in the manner that Love can affect an individual’s mind and “soul.”  This new idea was slowly absorbed by religions of the world to the point where many Christians these days speak only of God as Love, without the endless minutia of dogma that plagued early Christian and Catholic churches.
Mr. Campbell strives to show the evolution of this idea, first through the troubadours of the early 1100’s-1200’s, and then to the Romances of the Arthurian legends, Dante’s writings, and eventually through the dream-world of Joyce’s Finnegan’s Wake.  Because this Love development was essentially cataloged in song and literature, as opposed to history or scripture, this final volume in the Masks of God series was very hard for me to read through.  I just could care less about the source materials for Mr. Campbell’s explorations into Love.  I have a short attention span when it comes to romantic literature and the poetic words of people rambling on and on about Love.

While this volume did not engross me as the previous three did, I still was glad to have read it, and I am sure that the ideas contained within will resonate with me as I continue on my journey.  I think that this new myth of the all-encompassing power of Love is a good myth, because Love is indeed universal, even though many societies and cultures work hard to prevent romantic love from flourishing.  Love allows people to connect with each other, to step out of themselves and see the world through different eyes.  It helps soothe the pain of tragedy and soften the anger that rises up in us humans.  It also resists codification into specific rules.  Love is different for everyone, and therein lies its greatness.