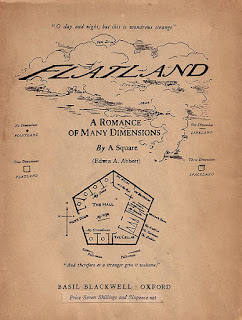 This slim novella is an amazing combination of social critique and mathematical exposition.  In the very early days of what was originally called “fantastic fiction,” and is now termed “science fiction,” part of the purpose of such tales as H.G. Wells’ and Mr. Abbott’s stories was to educate the populace in what was the forefront of scientific and mathematical theories and the cutting-edge research and hopes of the time.  The men and women who wrote this type of story were usually personally involved in the science they sought to describe and were able to communicate very complex ideas by the means of a narrative story.
The very best of these stories deal with such universal ideas and open up the mind of the reader in such a way, that they are still read and appreciated decades after their original publication.  Edwin Abbott’s Flatland is at once an exploration of dimensionality, and the frame of reference that must be shattered if one is to “see” reality for what it is, and also a deeply funny and caustic assault on the entrenched ideas of his time (Victorian-era England) which saw certain humans as inherently better than others, and that one’s birth status dictated one’s life status in perpetuity.
The narrator of the tale is a resident of Flatland, a world of only two dimensions, whose populace consists of straight lines (women), and an assortment of polygons, from the lowest classes (very narrow Isosceles triangles who are the military and laborers of the world), to multi-sided polygons (squares, pentagons, hexagons, etc., with class rising in accordance to the number of sides they have), to polygons with so many sides that they are effectively treated as Circles, the “Priests/Lawmakers” of the Flatland society, venerated and deferred to in every way.  Abbott’s description of the inherent nature of each class is very much the way Victorian people saw humanity, and the way that many people still see humanity to this day.  It is shocking to our modern sensibilities but very effective in portraying the rigidness and collective delusion that feeds such ideas.

After many chapters in which the narrator describes Flatland and it’s denizens and society, he describes a dream he had in which he visited Lineland, a one-dimensional world where women are points and men are short lines, and everyone lives along one single axis of existence.  He tries to talk to the Monarch of Lineland and explain how he comes from Flatland, but describing two dimensions to a one-dimensional being is near impossible.  When he awakes from the dream he has a most strange visitor, a sphere who is a resident of three dimensional Spaceland, who does the same thing to him that he did to the Monarch of Lineland in his dream.  The visitor tries to explain how Spaceland has three dimensions.  Since Flatland has length and width, our narrator can understand these, but he has a very hard time imagining height, as he has no frame of reference to understand such a, to him, fantastical idea.  After giving up hope, the Sphere ends up taking the Square on a visit to Spaceland and in doing so opens his eyes to the understanding that what he assumed was the truth of existence is only “true” in so far as it fits his frame of reference.  The genius of this is that the same idea also applies to the Flatland residents ideas about the class structure they impose on themselves.  One cannot get past an issue such as racism, or class-ism, or sexism, if one does not step away from the narrow viewpoint we all live in from day to day.  It is an amazing lesson and worth so much in terms of the good it can do for society.
The other day I saw a short video of William Shatner and Wil Wheaton talking about things and Wil Wheaton brought up Flatland as one of his favorite books, because of the ideas it manages to convey in such a short format.  It is also one of my favorite books, and I would love it if it was something assigned to, let’s say, all 9th grade students in public school.  It would help prepare them for the more complex math and science ideas they need to learn if they want to be well-educated citizens, and it would impart a lot of wisdom regarding the need to pull oneself out of one’s old viewpoints, to better see the world in its true nature.  I remember reading this novella maybe 20 years ago and digging on the math and science of it but not truly understanding the societal aspects of what Mr. Abbott discusses.  It truly resonates now.  What a cool book.

(This book can be read here:  http://www.geom.uiuc.edu/~banchoff/Flatland/ )
Posted by Rob Instigator