Science has had to withstand attacks from religion for so long... 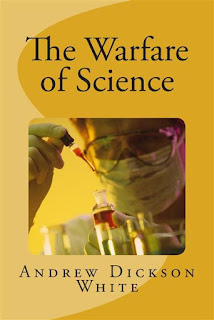 Over the last decades there has been a faux-uproar, fully manufactured and completely baseless, concerning what certain super-rich, super-powerful people have termed a “war on christianity.”  It is a deeply cynical ploy to distract from the seemingly endless failures of christian religious leadership, and to lay the blame on what they refer to as the “secularization of society.”  Most often than not, it is the inquisitive and varied fields of science that are blamed for this.  The real truth behind these accusations is that it the “war” has actually been the exact opposite of what these greed-head control freaks claim.  Religions, mainly the christian faiths, both Catholic and Protestant, have been waging war against the intellectual and societal advances brought forth for humanity by the scientific endeavor for thousands of years.  This slim book, by Andrew Dickson White, President of Cornell University, and written nearly 130 years ago, seeks to “present an outline of the great, sacred struggle for the liberty of science.”
The single worst flaw of religious dogma is the blind adherence to old texts, and the belief that within them are contained everything that is true and real about the Universe we live in, and that, if not included in the old text, then it is against “god” and must be exterminated.  The horrid truth to all this is that it essentially forces the populace to live based upon a very select few and their views and interpretations of what ancient, rewritten, edited, plagiarized, and outright falsified texts supposedly really mean.  That is the beauty of the scientific method.  It works without belief.  It is self-correcting.  Nothing, not even seemingly self-evident “facts” are above suspicion and all such “facts” are to be repeatedly verified via experiment and observation. Any new ideas or research must build on and include what has already been verified before, and if it shows that the previous knowledge was faulty in any way, it is to be re-checked and exposed to scrutiny.  This is the exact opposite of dogmatic religion.  Dogmatic religion asks the believer to ignore any questions they may have about what is being taught to them, for that is a sin against “god.”
Oh man did I get angry reading this book!  Mr. White starts off by stating his thesis, that “In all modern history, interference with science in the supposed interests of religion, no matter how conscientious such interference may have been, has resulted in the direst evils both to religion and to science, and invariably.  And, on the other hand, all untrammeled scientific investigation, no matter how dangerous to religion some of its stages may have seemed, for the time, to be, has invariably resulted in the highest good of religion and of science.  I say ‘invariably.’  I mean exactly that.  It is a rule to which history shows not one exception.”
Mr. White was a devout christian himself, and speaks very highly of the great value to humanity brought forth by the great religions of the world, but he spares no one when it comes to the use of theology to assail the foundations of rigorous science.  One of the first sciences he speaks of when it comes to religion’s attack on its findings is Geography.  It is hard to imagine now how vehemently religious leaders opposed the idea that the Earth was anything other than what is described in the book of Genesis.  The highest religious leaders took turns in first assaulting the theory that the Earth was a sphere, an idea that was crafted centuries before christianity, based on careful observations of the natural world.  These religious leaders and theologians, second in power only to kings, used poetic language from the Bible as if it was literal history and fact, assuming that when the Bible speaks of “pillars of heaven” and the heavens “stretched out like a curtain” by god, it is speaking literal fact.  Anyone who claimed the Earth was round was charged with the most heinous crimes at the time, blasphemy, heresy, and atheism.  These “crimes” were punishable by death.  For the most part, western culture has tended to accept a line from the Bible quoted out of context as holding more truth than verified scientific experiment.  There are still many in power that either believe this way, or pretend to in order to befriend the religious powers that help them get elected.

Even someone like Christopher Columbus, whose explorations opened Europe and European powers to the easily exploited resources of the New World, faced intense backlash from all religious corners, not because he was irreligious, but because he believed the world a sphere which would allow him to sail west and reach the “east.”  Before his historic sailing, “the Bishop of Ceuta worsted him in Portugal…[and] at the Junta of Salamanca the theologians overwhelmed him with quotations from the Psalms, from St. Paul, and from St. Augustine.”  They were using theology to fight science.  Even after he had returned from his trips with evidence of a new world to explore, the then-current Pope, Alexander VI, issued a papal bull demarcating the whole of the Earth as a flat disk, based on circular theological arguments.
Mr. White asks what came of this battle and what results were seen.  He states that what happened was that the idea was planted in the world that religion and science are enemies, creating a rift that has yet to be healed.  However, he also asked what the nascent science of Geography did for religion, and he finds that it actually gave humanity “a far more ennobling conception of the world, and a far truer conception of him who made it and who sustains it.”  To a faithful believer, the mysteries cleared away by science do not detract from the greatness of their god.  It only enhances their understanding of his greatness!  Isn’t that a much more sensible way to look at things?
The book goes on in detail to discuss religion’s tactics in their battle against other sciences, from Astronomy, Chemistry, and Physics, to Medicine and the Industrial Sciences.  In every single case, the general advancement and betterment of humanity had to take a back seat to the imagined dangers that the sciences posed to these dogmatic idiots and their conceptions of divinity and humanity’s place in it.  It hurts to remember that even to the present day there are still people who seek to use poetic language in the Bible to justify their beliefs in the inherent superiority of one type of human over another, or in the inherent evil of those that believe otherwise.  These bastards have always been very certain of what their god was telling them.  This certitude is the true enemy of humanity and human advancement.  Until it is done away with, we will continue to rail against new ideas, to denigrate those that are different, to condemn millions to servitude and ignorance and suffering, and to bask in the self-righteousness of those that “know” they are never wrong, because the Bible says so.