You never know what you will find when you explore, but you will never be the same once you do. 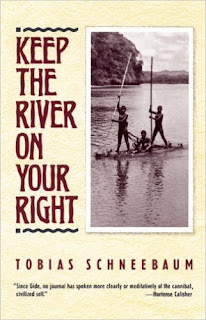 Keep The River on Your Right: Tobias Schneebaum (1969)

In the same vein as the previously reviewed Beasts, Men & Gods, This short book is the first-hand account of a man’s trip into one of the remote regions of our planet, his experiences there, and the changes wrought upon him by his journey.  Whereas in the aforementioned book, the writer was escaping the reach of a destructive and dangerous political revolution, in Keep the River on Your Right, Mr. Schneebaum heads out into the jungles of Peru on a scholastic and artistic mission.  This affords him the time and mentality to explore his inner world and question what he is experiencing and why.
Tobias Schneebaum was a young man who was awarded a Fulbright Scholarship to go to Peru and paint.  He hitchhiked his way from New York to Peru and eventually found himself more interested in exploring the wild, unknown jungle than in completing paintings.  He headed out alone and went from small towns, to villages, and ended up in a distant mission, headed by a slightly demented Spanish Priest, and several dozen native people.  He lived with them for several months until hearing about an even more remote tribe, about 6 days travel away.  He headed out alone and upon arrival was welcomed by the group he found.  He describes his assimilation into that tribe, and their day to day lives, all the while detailing his own internal journey.
This all takes place in a journal that Mr. Schneebaum keeps as he travels.  His writings, purportedly being scribed with several old friends he names “C” and “M” as the audience, read like a mind in discourse with itself.  His descriptions are personal, embroidered with an artistic sensibility, and contain deep thoughts which vex, torment, and delight him as his “old self” dissolves away, leaving him to reconcile who he thought he was with who these native people are.  Being a gay man in the 1950’s USA, his discovery that the men of these tribes regularly engaged in what the western world terms “homosexual” behavior with no shame, or guilt, or anything other than familial kindness and caring really stands out.  The tribe’s interpersonal relationships, their daily lives, and the ever-present lushness of the jungle, are wonderfully described.
This book gained a real level of notoriety, not only because of the openly homosexual subject matter, but because the author details how, after weeks of living with this tribe, and taking part in their hunting parties, fishing expeditions, and daily rituals, the men all gathered up, and went off into the woods together.  They traveled for days, arriving at another tribe’s camp, and the author’s companions proceeded to attack and kill every male in the tribe, leaving the author in shock and violently nauseous.  They then butchered the people, saved some of the meat to take back with them, and cooked some of the flesh.  When one of his tribe-mates offers him a piece of the flesh to eat, he does, and that moment haunts him deeply.
This book is widely seen as one of the few first-hand accounts of cannibalism that is not tainted by judgmental damnation, such as the accounts of the early Spanish priests in the New World.  It is just one small part of this story, but it weighs heavily on the author, understandably so.  Having lost himself in this insular world where the only concerns are waking up, eating, laughing, loving, and sharing what is available, he finds that who he is cannot be tossed aside so easily.  What he sought was an escape from the world he originally knew, but what he found was that he was a product of that world and could not leave it behind without losing many of the things which made up who he was at his core.  It is a good lesson.
Mr. Schneebaum was coaxed to travel back to Peru by filmmakers almost 40 years after he departed that world.  He was afraid that he would have to confront his cannibalism, and that all the people he knew would be dead, but he did find some of them again.  They were not unchanged by time.  They had been “civilized,” wore clothes, accepted christianity, and did not speak of their past as cannibals except to show the shame and revulsion experienced by those who had only recently learned that they were “sinning” previously.

(The documentary where Tobias Schneebaum goes back to visit the places he lived in in his youth can be seen in its entirety here: https://youtu.be/hsy2SRu79yw )