Death, we've all got it coming. 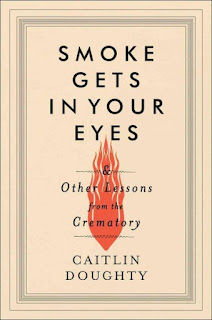 Smoke Gets in Your Eyes: and Other Lessons from the Crematory – Caitlyn Doughty (2014)

Death is as natural as it gets.  The process of life ends inevitably in death.  The true “human condition,” what actually differentiates us from most other animals, is that we live our lives with the foreknowledge of our own imminent demise.  At least, most of us humans do.  It is what pushes us to achieve, to marry and reproduce, to explore, and to many of us, to wallow in deep depression and self-pity.  Our views on death feel natural and organic, but they are far from it.  It is our culture and our families that teach us how to look at death, how to receive it, and experience it, and think about it.
Our western society has kept up a steady pace of removing death from our daily lives.  Whereas people used to die at home, surrounded by family, and cared for after death by the family before burial, nowadays most people who die non-accidental deaths do so in a hospital, nursing home, or a hospice of some sort, usually surrounded by strangers, in a clinical, anonymous environment, and embalmed of cremated before burial.  This is a fairly recent phenomenon.  Caitlin Doughty wrote this book after diving in head first into the world of crematoria and funeral homes.
The author has a long history with death, both in a personal and in a scholastic manner.  She details witnessing a young girl fall from a second story balcony at a mall when she was a very young person and how it stamped mortality into her unprepared brain.  She proceeded to mature and grow as a young girl and young woman, with countless manias and phobias all directed at keeping death at bay.  She talks about how as a kid she would repeatedly spit into the front of her shirt, thinking that this was somehow a talisman that would keep death from coming for her mother.  Our world and her family had not prepared her for the existence of death itself, so when she first experienced such an event, it traumatized her deeply.

In her University studies she focused on medieval literature, specifically anything and everything to do with death and how different cultures saw and dealt with death and the dead bodies.  After school she applied and got a job as a crematorium operator, for a funeral home in the Bay Area of California.  Ms. Doughty draws on her education and shares parts of what she learned and studied regarding cultures and death as she describes her life in the crematoria.
The descriptions are brutally accurate with nothing undisclosed, from the colors of putrefaction to the hardships of dealing with the bereaved to the horrible and unexpected accidents and situations that can occur working in such a morbidly specialized field.  As she grows experienced in her job she also talks about her growth in life, and how she hates the funeral industry that seeks to market every possible euphemism for death without actually discussing the truths of death with the bereaved.  Much scorn is heaped upon the con-artists who see a family’s suffering as a means to fleece them for more and more money.  She was lucky to work at a place that did not have a corporate structure forcing them to cut corners and mass-produce results, and with co-workers who were decent and dedicated.
This book really made me think deeply about death and my own experiences with it.  My father died at home, after a long illness, and I was able to go sit with his body for a while by myself.  I could not imagine at the time anything worse, but I am very glad that he died at home, surrounded by his family, and not stuck in a cold, grey box at a hospital or hospice or nursing home somewhere.  The author describes her dream for our modern world, where people can die with dignity, be cared for by those that love them, and be interred or cremated with a proper sense of ritual.  These rituals are not for the deceased, but for those they leave behind, and the more meaningful and resonant we can make these rituals of death, the better we will all be as a result.  Our modern world lives in a state of constant fear and anxiety about death.  We hide our aging, we ignore the elderly, and we focus solely on youth and youthfulness, as if death could be ignored or magically kept at bay.  Death gives meaning to our lives.  Death creates new life.  We even ignore the vast millions of deaths caused by our needs for convenient meat and vegetable.  It is creating a culture with deep imbalances, and bizarre coping mechanisms.  The most popular drugs right now are prescription painkillers, used by people of all ages to numb their inner lives, to blank out and ignore the progress of life towards death.  This book makes a good case for fixing this before it can no longer be repaired.