The Mouse is your God now. Do not denigrate the Mouse.... 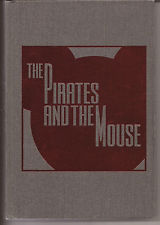 The Pirates and The Mouse: Disney’s War Against the Counterculture – Bob Levin (2003)

I have loved comic books ever since I would read Donald Duck comics off of the rack at my aunt’s bodega in Puerto Rico.  The first time I came across underground/adult comic books I was in shock!  How were they allowed to draw such things?  Would I get in trouble for reading this?  I think this trepidation is part of the allure of underground art and literature.  They speak of things that the mainstream publishers just do not wish to be involved in.
Comic books have always scared a certain segment of the population.  Some people, too old to understand what the youth appreciate, find all comic books to be lacking anything remotely beneficial to the reader.  Others see them as downright damaging to a developing child’s mind.  It gets really weird though when the comic books in question are specifically aimed at adults.  The backlash can be immense, and the full weight of the legal system can be used to squash the artist’s efforts.  This is what happened to the comic artists whose story makes up The Pirates and The Mouse.
The biggest topic of this book is that of copyright, specifically asking if a company’s copyright on their material prevents an artist from creating art using such copyrighted material.  The USA Supreme Court has continually extended copyright longer and longer, at the request of giant corporations such as Disney, whose earlier copyrights were due to expire, leaving characters such as Mickey Mouse in the public domain.  However, the Supreme Court has also constantly backed an artist’s right to create parody, critique, and satire based on copyrighted material.  Combine all of this with the sea-change occurring in the 60’s and 70’s with the rising up of a counterculture and you have a situation primed for litigation and conflict.
The cool part of this book is that Mr. Levin does not just discuss the underground comic books that offended Disney and the litigation that ensued, but he also takes great care to inform the reader of what exactly was happening in the world at the time, framing the reactions of the angry and dissatisfied counterculture with the political and social brutality and horror that is all too easily ignored these days when discussing the decades following WWII in the USA.  Too often we hear about the counterculture as some sort of freak fruit that grew out of a perfectly fine tree, when it was actually a new and healthy fruit growing out of a rotten, diseased, and crumbling old tree.
The Disney Corporation grew from a small group of creative people to a multi-national corporation whose main product, Mickey Mouse and the gang, were so ingrained in the fabric of America that Walt Disney saw any attack on them as an attack on the idyllic, conservative America that his Disney theme parks and movies sought to portray.  The underground comic book artists based out of southern California saw Disney and its characters as the perfect target for parody, using them to show all that they saw as wrong in the culture at large.  Much of this book describes the creators of these comics, as well as detailing exactly why they were not in a prime position to defend themselves against Disney’s charges.  It is hard to organize and function as a cohesive unit when the mindset they held was closer to pure anarchism and rebellion.
While much of this book was very interesting, there were long passages where the main topic was the legal actions taken, and I find legalities very boring.  The author is an attorney himself, and is very interested in describing the back and forth of the legal attacks.  He is honest in describing the reasons why Disney managed to win against the comic book creators, but it makes for tough reading sometimes.  The fight for free speech in life and in art is not a glorious, dramatic battle, but a sequence of nearly endless skirmishes, for there are always new ways to try and silence the social critics, regardless of the medium they choose to use.