From Great Pain Comes Great Humor...Thank Goodness For That! 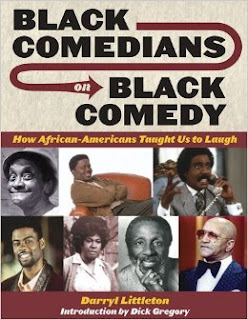 One of the best book-buying days of the year in Houston is when the Friends of the Houston Public Library hold their annual book sale.  Most years it is in a large convention center floor with hundreds of thousands of books that are available for purchase.  Many of these are donations that did not fit into the collections, or were multiple copies, or were discarded due to either damage or a new edition being published.  The volunteers divide all the books into different categories.  I rarely look through the Humor section but on this particular day the other tables were running thin.  That is how I found this cool book, which reads like an oral history of black comedy.
The history of black folks in the USA always starts with the lowest of the low, the capture and enslavement of hundreds of thousands (maybe even millions) of Africans brought to the New World as property to be used in the service of white plantations and farms, and to breed the next generation of new slaves.  The author discusses how the very earliest forms of black humor in America, the post-Civil-War minstrel shows, began in the plantations, where the African slaves would sing songs and crack jokes ridiculing their white owners.  These antics, especially the ones where the slaves would exaggeratedly play-act what they saw their masters doing, were seen by the plantation owners as entertaining.  They did not understand that they were the butt of the joke.  The slave-owners found the slaves’ cracking jokes and acting the fool to be hilarious, and demanded them to do it for the slave-owner’s amusement.
This is very ironic, and still happens to this day.  The oppressed mock the oppressors, and the oppressors, in their willful ignorance, find it amusing and start to believe that the oppressed are actually that way, instead of understanding that they were pretending/acting/cracking jokes.  The original minstrel shows were white entertainers painting themselves up in black-face and imitating the antics they saw the slaves do.  Black entertainers after the Civil War figured they could do the same and earn a living, even though they still had to put on the black-face themselves!  Ridiculous, but then again, everything about racism is ridiculous.
This book traces a history from those original minstrel shows to the development of what today is called “stand-up comedy,” with a focus on African-American comedians.  It proceeds chronologically and touches upon most of the comedians of note, splitting time between the history lessons of the author and quotes from the countless interviews the writer did with modern-day comedians.  Many times these interludes are straight jokes, and others are discussions of comedic heroes.  It is very cool to read about what current comics think of the old masters, and to share in their understanding that the comedians that had to suffer the black-face and the minstrel shows and the demeaning roles in movies and television did so because otherwise they would not have worked at all.
One of my favorite comedians is a man named Robin Harris, who died in his late 30’s, and was integral as an M.C. in helping create the comedy club scene that sprang up in the early 1980’s.  Like most comedians, he had to hustle and scrape to develop a career, and was well on his way to being the next Redd Foxx type when he died.  Having come up at a time before ubiquitous cameras and the internet, there is not much out there to remember Mr. Harris by.  What there is out there is pure gold, but it is very cool to read a full background of Robin Harris as well as the comments from many comedians who revered this master of the put-down.  It is in this respect that I most enjoyed this book.  Unlike many other performers, a comedian’s personal history is not really shared with us regular folks.  This book does this and makes these comics much more real.
No art is created in a vacuum and comedy is most definitely an aggregate of its previous history.  Today’s African-American comedians and their personae were earned by the many that came before them, and it is this shared history that makes black comedy stand out from the generic comedy on stage at many of our comedy clubs.  The influence of black comedians and black comedy on the general American sense of humor is second to none, and carries a lot of pain and suffering through it, much like the other ethnic comedy that shapes American humor, that of the Hebrew comics and vaudeville acts.
From great suffering comes great art, and from great pain comes great humor.  The least funny among us is usually the most content and satisfied.  Humor is a weapon against pain, and when we share the laughs, we share in the easing of that pain.  We’re all in this together people!  It is hard to imagine that it was only a few decades back that black folks were still relegated to “n****r heaven” at clubs and theaters.  Not only were these paying African-American patrons relegated to the hottest part of any theater (the upper balcony) but they were actually instructed to wait until the white audience laughed before they laughed themselves.  The privileged white audience could not be made to feel uncomfortable because the blacks were laughing at a joke they did not get.  Horrible.  Humor allows us to look directly at the ugliest parts of ourselves, and to laugh at them, and hopefully defuse them enough to be changed.  A clever joke can make one think more deeply than the best written and persuasive oratory could ever hope to do.  Thank goodness for the comedians.