A Sequel to an Old Classic Favorite About The BATMAN!!!!! 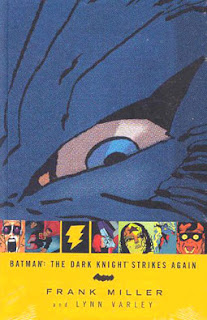 When I was in middle school, I remember seeing advertisements for a mail-order-only special mini-series comic book called the Dark Knight Returns.  As I was a young kid with a tiny allowance, I never purchased them, but when they were collected as a trade paperback I went and got that bad boy and it immediately became my favorite comic book.  I was always a huge Batman fan and to see this story of an old, washed up crime-fighter who comes back to wreck shop on the unsuspecting criminals of Gotham City was awesome.  Frank Miller’s hard-boiled (before Sin City) story and his artwork blew me away.
Over 15 years later, Frank Miller wrote and illustrated a follow-up to the Dark Knight.  The world of comic books had absorbed his earlier work, along with such classics as Alan Moore’s Watchmen and Miller’s own work on the Sin City stories, so the freshness of a superhero comic book story not aimed at children was gone.  Miller was still up to the task of crafting propulsive stories for the dark knight detective however.
I did not read the Dark Knight Strikes Again right away, as I was of the mindset that the original was a self-contained masterpiece and to fuck with it would just diminish it.  In that time, I had also stopped reading the monthly comics, and missed the change from hand colored artwork to computer coloring.  While the same colorist, Lynn Varley, did both books, the original was greatly enhanced by the amazing watercolor skills that Varley used to create an original atmosphere for Miller’s drawings.  This second volume was colored digitally, and I originally found it too garish and ”cartoony” to get into reading the story.  I am glad I got over that shit!  One other thing that is missing is the ink work of Klaus Janson, whose delicate penmanship added so much detail to Frank Miller's pencil drawings.  He would have really helped the visual look of this second book.
Re-reading this book, I find that the story is still as convoluted and dense and frantic as before, which I love.  The artwork is nearly as good as the original, but it is evident in the lack of background details in the panels that Miller rushed this into production.  The younger Miller obsessed over every single detail in the backgrounds of each panel, adding a claustrophobic sense to the reading experience.  Too many panels here use simple color washes as backgrounds.  I still find the coloring too intense and distracting, but I think it suits the nature of this sequel, making it seem more “modern” by comparison to the original.
These “Dark Knight” stories by Frank Miller do not exist in the same continuum that the DC Batman comic books do.  They are tales of a possible future for the Dark Knight.  In doing this, Miller unintentionally started the craze of alternate timelines in comics, where different X-men teams live in different dimensions and have different members, for example.  I like to imagine that Miller’s Dark Knight tales are the true end of Batman/Bruce Wayne, and I hope to be pleasantly surprised by the third installment which should be on bookshelves soon.
Oh, one more thing.  Batman is NOT a superhero.  Superheroes by definition have super-human abilities/powers, and Batman has none of these.  He is just a human being, immensely smart, immensely wealthy, and immensely obsessed with fighting crime.  While the murder of his parents was a tragedy, it did not force Bruce Wayne to be Batman.  He CHOSE to be Batman, and worked at it until he became the Dark Knight Detective!  In a world of superheroes who got their powers from radioactive canisters, differently-colored solar rays, magic lanterns, and industrial accidents, the Batman stands alone.  Long live Batman.