Let us hope that the Avengers: Civil War film is better than its source material! 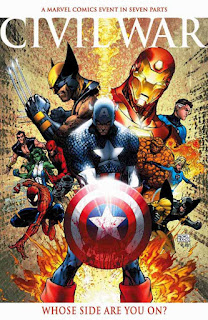 As a life-long reader, I try to avoid watching films adapted from novels or books I have already read, for I am always left disappointed.  Sometimes it is a minor disappointment, such as my small quibbles with the film adaptation of Alan Moore’s Watchmen masterpiece, and other times it is a full-blown disaster where I leave the theater wondering how someone could get the plot of a novel so wrong in adapting it to a movie.  There are a few films that I felt have done true justice to their source material.  One of them is the film version of Vonnegut’s Mother Night, which is as brutal and engrossing as the novel, and Terry Gilliam’s version of Hunter S. Thompson’s Fear & Loathing in Las Vegas, which captured perfectly the sick highs and debauched lows of the book.
I have never differentiated between high literature and low literature.  Words and stories are all on equal ground to me.  A wonderful comic book can move me and inspire me as much as the most lauded literary classic.  Comic books actually helped introduce me to a wide world of literature that I otherwise would have never explored, from Robert E. Howard’s Conan stories, to Philip K. Dick, to classics such as Robinson Crusoe and Moby Dick, which I first read in their Classics Illustrated form.  Knowing that the upcoming film Captain America Civil War was an adaptation of the Marvel Civil War story-line I read the comic in advance. I would rather experience the original and then compare it to the film than to do that in reverse with the film coloring my view of the comic.
Having done that, I soon realized that perhaps my thinking was off.  The Avengers: Civil War story-line does not only take place over the course of the 7 titular issues, but is spread out over nearly 80 different Marvel comic titles!  It is an unholy mess that does not live up to expectations, and actually drove me to anger and resentment at having to read superfluous material (Marvel Girl, Young Avengers, etc.) just to gleam that one little bit of information actually relevant to the Civil War story-line.  Because this was essentially a cash grab by Marvel Comics, they planned it so that if one does not read all the peripheral titles the main story-line is damn near incomprehensible.  What a blatant greed-head move.  It does not help that the actual story-line is weak and could have been handled in 3 or 4 issues.  This story was instead spread out over ten months of tedious tie-ins.  (To see the full list of issues included in the Civil War story-line, click here: http://projectfandom.com/wp-content/uploads/2014/12/Civil-War-Checklist.png )
Brutal!  I have not even gone into the actual story-line.  It is so weak.  Here goes.  A group of superfluous superheroes films themselves fighting crime for a TV reality show.  In the course of this, the enemy they seek blows himself up, along with 800-900 people in a small town subdivision.  Several hundred of them are children.  This causes uproar nationally and the US government works with Iron Man Tony Stark to create a super-powered beings registration act.  Essentially, the government wants all super beings to register with them and only use their powers and skills at the request of the Federal Government.  Captain America, who has fought for Life, Liberty, and the American Way since World War II, finds this to be fascistic and gathers up superheroes to fight against those who take Iron Man’s side.  Lots and lots of extraneous discussions and random battles take place as all the Marvel heroes take sides in this conflict.  In the end Captain America gives up, not wanting to fight his fellow heroes anymore (after beating the crap out of Iron Man), and is assassinated as he turns himself in.  IT IS FUCKING POINTLESS.  I do not think they kill off Cap in the film.
I wrote that story in less than a paragraph, and Marvel stretched it out to over 85 separate issues!  I hope that the movie does a massive edit and removes all this fluff baggage.  I hear it is very well done, and very exciting, so I look forward to seeing it.  However, I cannot recommend this comic series.  If you only read the seven “official” Civil War titles, you will make very little sense of it as a whole.  Trying to dig through 80+ extra titles to find that little bit of info that helps the Civil War story-line continue?  I can’t believe I did it, and I hope you do not.
Posted by Rob Instigator