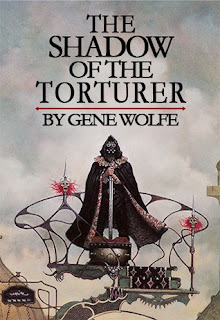 There are writers whose names float around in my consciousness, having heard of them from other readers, or from various book reviews or articles I read.  The name Gene Wolfe was one such name.  I knew him to be a writer of fantasy/science fiction, and that he had a very loyal following of readers who found him to be a master storyteller.  He has never been a “best-seller” but his works always attract a devoted readership.  When my man Severian, from the Sonic Youth Gossip Forum, suggested I read the 4 volume series Shadow & Claw, and when I realized it was by that same Gene Wolfe whose works I had yet to read, I hit the library and checked out the first two volumes.  Upon opening up the book I was surprised to read that the main character, the “Torturer” in the title, was a young man named Severian!  Ha!  I now knew where my online friend had unearthed his bizarre forum handle!  Since my real-life Severian had already led me to read the great and bizarre Area X: The Southern Reach Trilogy by Jeff Vandermeer, I felt that I would enjoy The Shadow of the Torturer.  What I did not foresee is the extent that Gene Wolfe’s writing would slink into my brain, occupying my non-reading time with thoughts about the odd book I was reading.


This book begins the story of the torturer Severian by introducing him as our narrator, describing events in his past to us, and gradually exposing us to this ancient, mysterious world in which Severian lives.  He is a young man, near to adulthood, who since his birth has been trained as a torturer’s apprentice.  The world of this story reflects a rigorous caste and guild system that helps hold together this society, but whose specific meanings and symbolism have been lost to the passage of time.  It is an ancient civilization, one that has merged its technology and advanced knowledge with feudalism and brutal enforcement of the rules.  Most live their lives in deep superstition, and fear of others.  People stay to their own kind, and in their own guilds.  In fact, whole generations die within the walls of their respective guilds, sometimes never stepping foot outside into the giant, nearly incomprehensible city outside.  In fact, this first volume is strictly the tale of Severian as he seeks to leave the giant city, ending as he enters the gates leading outside.
There is a lot of amazing imagery in this book, and part of the joy of it is losing oneself in the world that Gene Wolfe has created.  He does it so subtly, yet so completely, that it feels almost too real, as if the real world around you is fake and the story in the pages is the reality.  This is what the very best of genre fiction does.  It takes the reader’s mind and sends it hurtling through a wholly fabricated world, a world created by the writer’s words and the reader’s imagination.  The best writers build such amazing worlds that people return to them again and again.  Frank Hebert did it with the Dune books.  Robert E. Howard did it with the Conan stories.  While Dune was a messianic tale of galactic intrigue, and the Conan tales were the start of the swashbuckling Sword & Fantasy genre, Gene Wolfe’s Shadow & Claw seems to be headed in a completely different direction, although I will have to read the next three volumes to truly understand.  Right now, I have come to know Severian, his life, the world he lives in, and his training, but have yet to see where he is destined to be, although countless hints and possibilities come to mind.  I am very excited to see where this story goes!

(This book is available for purchase here: AMAZON )
Posted by Rob Instigator