ANGER IS AN ENERGY! John Lydon tells it like it is. 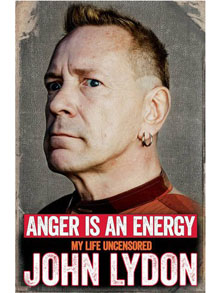 This book taught me a lot about John Lydon’s life, the Sex Pistols, the creation and maturation of Public Image Limited, and gave me a great window into a man who the media chooses to portray as a pure anger cartoon.  Lydon is quite complex and interesting and I would love to meet him someday and listen to records with him.