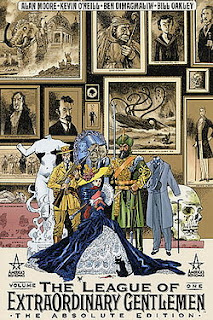 Writer Alan Moore is responsible for several of the best comics of the past 2 decades.  His work is always highly researched and deeply engrossing.  For this comic series, he resurrected the old pulp heroes of his childhood, such as Allan Quatermain, Captain Nemo, Hawley Griffin (The Invisible Man), and Dr. Jekyll/Mr. Hyde  among others, and gathered them as a kind of super-group, working in the shadows to aid Great Britain as only these heroes can.
Being American, I had only passing knowledge of some of these pulpy characters, but having immersed myself in American pulp heroes (The Shadow, The Black Cat, Flash Gordon, Conan the Barbarian, etc.) I was more than willing to be sucked into Mr. Moore’s dense stories.  One thing that is different between American pulp and British pulp is the focus on wordplay and erudition in the British heroes.  American pulp heroes are usually not talkers.  They are beings of pure action, whose words fail them and whose physical gifts and intelligence must save the day.  These British heroes are drawn from literature, and therefore these comics have a more literate quality than I expected.  Alan Moore is an intellectual person, and his characters’ dialogues are always more refined than his American contemporaries.
The story within The League of Extraordinary Gentlemen (even the name of the group is very British.  Nothing like the American hero-groups who are all called either Fantastic, Avengers, Uncanny, etc.) centers around threats to the British crown, and the machinations behind the scenes by a mysterious “Mr. M” who has gathered up the group and uses them to fight back against these threats.  The story is framed by prefaces that read like the old pulpy yarns these heroes originally appeared in.  The artwork is refined, yet chaotic and dense, very indicative of the crowded world of late 19th and early 20th century England.  I do not want to discuss the specific details of the plot as I do not wish to give anything away, but it draws in several other British literature characters.  One of the cool little bits is how Moore hints that heroes have been gathered before by the British crown under the “League of Extraordinary Gentlemen” moniker.  I love how he creates a backstory when he writes.
While it is not my favorite of Mr. Moore’s works (Those would be The Watchmen and From Hell, about the Ripper murders), it is still a great read and even a cool introduction to characters which the mainstream has generally forgotten.  I am sure that if I was more familiar with the source material for these characters that I would have picked up on a lot more cool stuff.  It is not as cohesive a whole as I would have wished, but perfection is rarely achieved, if ever.