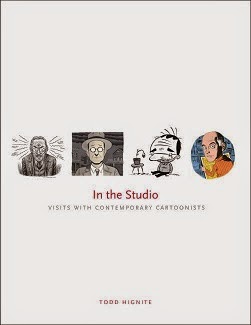 In The Studio: Visits with Contemporary Cartoonists – Todd Hignite (2010)

This is another book that serendipitously leapt into my hands as I browsed the Library shelves for a different title.  I love books where I can read the thoughts and opinions of artists I admire.  This book is great for that. Todd Hignite, the author, spent several years visiting the studios of prominent contemporary cartoonists.  From Robert Crumb, to Art Spiegelman, to Charles Burns and Jaime Hernandez, the author captured a great selection of the preeminent cartoonists of the last 40 years.

The best part of this book is that the artists are allowed to talk.  There is no back-and-forth between the artists and the interviewer.  Only the artist’s words are recorded, along with images that either influenced the artist and to which they directly refer, and images of their work used as examples.  This is genius.  It allows the reader to feel like he is in a conversation with the subjects instead of just reading the transcript of a conversation.  Every artist shows how they make work, why they do, who influenced them, who they admire, etc.  It is so great, and all images are in full color.
The worst part of this book is, sadly, the introductory essays by Mr. Hignite which precede each artist’s section.  I have never read prose straining so hard to sound intelligent and deliberately obtuse.  He makes the mistake that many do where they try to write in a high academic manner about comics and comic artists.  He loses all sense of whimsy, wonder, fun, and silliness that is inherent in comics, especially underground comics.  It is so brutal, so forced.  I actually just skipped his intro essays after the third one.  The contrast between how the artists talk about their work and how Mr. Hignite does really lowers the book from a classic to just good.  What a shame.  Sometimes what is needed is a light approach, not to try and sound like you are smarter than the reader.  The worst writing in Art History is that which seeks to imbue something with far more importance than it really has.   That being said, I still recommend this book for anyone interested in underground comics, comics as an art form, or the creative process in general.
Posted by Rob Instigator