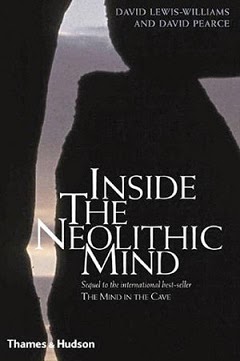 Inside the Neolithic Mind: Consciousness, Cosmos, and the Realm of the Gods – David Louis-Williams, David Pearce (2005)

I find that a lot of what I read in terms of anthropology and pre-historic archeology ascribes a lot of assumptions to ancient human’s lives and beliefs that are pure unfounded extrapolation.  The focus of the writer’s views is put onto what is usually very flimsy evidence.  So many books have been written purportedly showing how ancient man worshiped this or that, or what rituals they engaged in, with too much fluff and not enough corroborating evidence.  This ends up in biased ideas, meaningless as a result.  Judeo-Christian writers tend to lean towards ascribing monotheism to people who had no clue what us modern humans refer to as monotheism, for example.  This is done even though the available archeological evidence for such beliefs is slight at best.
Ancient humans did not achieve written language until fairly recently in our existence here on Earth.  This tends to skew knowledge left by writing cultures as being more relevant to us, more advanced and therefore more “true” than what non-writing cultures believed.  It also devalues the knowledge that can be gleamed from ancient people’s artifacts, construction, homes, and other such non-verbal creations.

Mr.’s Lewis-Williams, and Price are two archeologists/ethnographers seeking to ascertain the development of spiritual thought in ancient man through the analysis of the ruins excavated by us over the last 150 years.  It is a very interesting idea which is quite fruitful in detailing how human’s living spaces and their development correlated to the development of their metaphysical beliefs.
For most of history, humans did not believe in gods or deities or the existence of a soul.  Life was life, and the world functioned in mysterious patterns.  The authors use evidence from ethnographers to show that a belief in a soul was not an initial concern for man.  Instead, humans first noticed our shadows!  Many languages share the same word for a soul as for a shadow.  In English, for example, a ghost can also be described as a shade.  Humans understood the existence of a shadow to mean that all humans have two parts, a physical part, (our bodies), and an intangible part (our shadow/reflection).  Our shadow/reflection grows and shrinks, disappears in darkness, is distorted by ripples in water, but it never goes away.  Once human conceived of this shadow as a literal part of themselves (as opposed to what we now conceive of it as, a demarcation showing where light has struck us on the side opposite the shadow,) they began to think about where that shadow goes after death.  It was this “shadow” of a human that early man feared would wander about and which needed to be appeased or repulsed by ritual of some sort.  This led to the development of burial rituals in human groups.
Once humans created structures, and the evidence shows that this happened thousands of years before the development of agriculture, they began to build with this shadow realm in mind.  It is these construction details that the writers analyze in this book.  It shows quite plainly how human’s habitations progressed from personal places where the dead shared the space of the living, sometimes for months until the dead were eventually buried under the home itself, all the way to the development of specific separate structures used to carry out rituals related to the spirit world.  In our modern world we see this in churches and mausoleums, yet many cultures of the world live more like man of 10,000 years ago.  They still share their homes with the souls of the dead.
This book sheds light on what are essentially the beginnings of religion in human culture.  It is fascinating to see the many diagrams of ancient Paleolithic structures and man’s burial methods.  It is a great book and explores many of the lesser known Paleolithic sites not normally discussed in the standard texts.
The insights into the human view of the cosmos itself are equally engrossing and valuable.  Humans first saw shadows, then thought about living spirit animating matter, then about the place of man and his soul in the cosmos, and only after that did man create gods to personally protect and create the world around us.  Just how people study the progression in art or poetry, these two authors have studied the progress in human habitations to shed light on something that had been ignored for too long by the mainstream archeological community.