Did ancient humans have a highly advanced civilization? 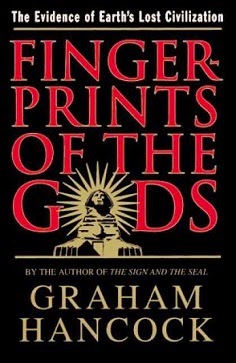 Fingerprints of the Gods: The Evidence of Earth’s Lost Civilization – Graham Hancock (1995)

This is another of the many strange and deeply dense books describing what the author feels is evidence that humanity is very ancient and that human civilizations started way before the accepted ideas of modern archeologists who place the first civilizations in the Tigris-Euphrates region of the Middle East.
Mr. Hancock details the many tales and legends that human societies and groups have regarding cataclysmic floods and earthquakes that wiped out most human life on planet Earth.  He seeks to interpret these stories as being a sort of archetypal, communal memory of a time long past in which the Earth looked a lot differently, and which had within it technologically advanced civilizations.  Supposedly, evidence of their existence has been destroyed due to tectonic events preceding the last Ice Age.
It reads a lot like Fantasy or Science Fiction, but Mr. Hancock is indeed trying to figure out why these stories exist.  He provides many examples which do not fit in with conventional history.  While it is hard to know if these ideas will ever be confirmed, it is definite that much, if not most, of human development is lost to time.
Hominids have been around the Earth for over a million years.  Multicellular life has been prevalent for over 3 Billion years.  The expanses of time involved are so vast that we lowly humans, with an average lifespan of less than a century, just cannot fathom them.  We can barely grasp how humans lived one thousand years ago, much less half a million years ago.  There is vast room for the likelihood that advanced human civilizations existed in the mists of pre-history.  It is very plausible that cataclysm destroyed them.


One of Mr. Hancock’s suggestions draws on others' work in plate-tectonics.  We assume that continental drift occurs slowly, over millennia, but many geologists propose that at times large chunks of the Earth’s crust could slip and slide and create planet-wide disturbances.  All of this is plausible, though not currently discussed.
Either way, it is a great little book with tons of info on the fringe of modern pre-historical thought. I hope that some evidence of a sort can be gathered showing the truth in these ideas, or at least dispelling the hypothesis totally.

(This book is available for download as a .pdf file here: http://megpugh.com/files/Graham_Hancock_FINGERPRINTS_OF_THE_GODS.pdf )
Posted by Rob Instigator