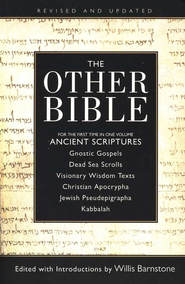 The Other Bible – William Barnstone, Editor (2005)

What is referred to as the Bible is thought of by many as a book, when in fact the word Biblia actually means a collection of books.  The bible that Gideons stash in motel and hotel rooms around the world is a collection of writings, aggregated and edited over the last two thousand years or so.  The “Old Testament” was put together in a basic form around 600-400 BC and the “New Testament” was put together around 400-800 AD.
Much of what is in our current Bible are translations of translations of translations, and some is outright forgery.  Historians both secular and biblical agree on this, and they have found many different books that at one point or another were considered Holy Books, and were included among the books that became our Bible.  The Hebrew Torah contains whole books that are not part of the “Christian” Old Testament, for example.
The early Christians were not organized under any dogma until the time of Constantinople, around 800 AD.  Before this many hundreds of different sects wrote scripture for their beliefs.  It is these books, gospels, and poems that make up the contents of “The Other Bible.”
So many of these writings had been lost in time, or to ridiculous distortion by those who wished to push their brand of Christianity.  The discovery of the Dead Sea Scrolls and the storehouse of scrolls at Hammadi (the Nag HammadiLibrary), in the early part of the 20th century shed light on the variety and depth of religious writings and thought that existed before the Catholic church codified it’s dogma and persecuted anyone who believed or taught otherwise.

Much of this writing is beautiful, and full of wisdom.  One favorite of mine details a list of things that a man should do to be a good man and a good leader.  It was written by a king for his chosen heir, who proceeded to completely ignore his adopted father’s wisdom.  Nevertheless, the writing is so wise, so well-suited for a worthy life of a leader of men that it is a shame its genius was not included in our Bible for the world to know.
I love books like this, books that are vast storehouses of knowledge and history.  It sheds light on how myopic the worldview of people who live by the idea/dogma that the Bible is literal truth, literally the word of some god somewhere and that nothing else is worth reading.  This mentality was used by the Catholic Church to enslave humanity in Europe, Western Asia and Africa for over a thousand years.  It drove serious, skeptical inquiry and all fields of exploration into hiding.  It created vast millions of illiterate people.  It fed a culture of ignorance which saw millions die of disease which was attributed to demons or Satan or to the sufferer’s sins.  We are still living with the repercussions of this horrible bullshit.