My favorite book of all I have read in the past few years! 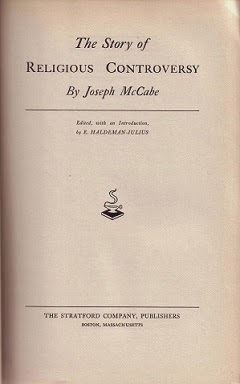 This one’s a doozy.  First, let me describe how I came across this gem of an out-of-print book.  I was going through the library shelves with a list of books to look for, when I saw the spine of this book.  It was black with gilt lettering.  I thought, “Hmmmm….” and grabbed it.  Opening it up, I looked at the chapter list and was blown away by the contents.  Seeing as how I love to learn about the history of free thought, skepticism, and atheism, and how I like to find books that have massive amounts of well-researched data, I almost creamed my pants!  This book is so great, and it introduced me to a writer from 100 years ago, Joseph McCabe, who I otherwise would never have read.  I love “library angels!”
(“Library Angels” are defined as the beneficent entity/force that allows just the right book to be discovered by you at the right time, even if you were looking for something else.  I love how that happens!  Some researcher came up with the concept after experiencing this several times, and then speaking to others who have also experienced the phenomenon.)
They say that history is written by the victors, and that is nowhere more true than in the “histories” of religion, especially the Christian (Roman Catholic) religion.  Mr. Joseph McCabe was a monk, then a priest, and he personally witnessed the lies that feed religion and the trauma caused by these lies, both on those who lead and those who follow.  He left the church, and his faith, and proceeded to delve into the original source material for the Bible.  He studied countless religious writings from all eras.  He translated those that did not have ready translations, to better understand them and to share the knowledge, learning ancient Greek, Aramaic, and Hebrew to do so.  He wrote over 40 books on everything from the history (hidden and otherwise) of the Popes, to treatises on matters of morality and its sources in human affairs.
This book, The Story of Religious Controversy, deals with the history of free thought, agnosticism, and atheism, and its relation to the belief systems of the times.  It is awesome.  Not only does Mr. McCabe detail the various sources of our morals, religious beliefs, etc., but he describes in great detail and with impeccable research the ways the lies of religion took shape and were forced upon the masses.  He points out how the religious powers rewrote or straight up forged the very source material they sought to venerate.  It is amazing stuff.  Every chapter is a new revelation to explore.

Having read many similar books, the freshness of this nearly 100 year old book blew me away.  Mr. McCabe never becomes petty, or spiteful, or vindictive, even though he has every right to be.  He shares his knowledge as if he was educating a person, not preaching to those already in agreement with him.  He lays out all the evidence in the best scientific manner possible.  Joseph McCabe has become one of my intellectual heroes and I hope to collect as much of his writing as I can.
For me, this book is indispensable.  I will buy it one day.  It is out of print and expensive, but I will buy it.  It will serve as a reference for the rest of my life.  What a bad-ass.