Myths do not change. They just give them new names. 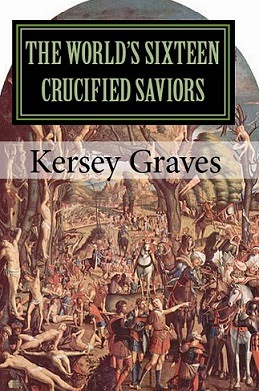 So many people go through life accepting whatever has been told to them by others, never bothering to check out for themselves whether it is true or not.  This is especially true of much religion, which coerces its followers into NOT checking the veracity of their claims because to question what a church leader tells you is a sin, so they say (see how the con-game works?).  This book, written almost 150 years ago, is a great fount of information regarding the many religions predating Christianity which were the sources for much of the Jesus Christ mythology.
Church leaders like to talk about how Jesus suffered by being crucified, in order to atone for humanity’s sins.  They usually fail to mention that crucifixion was a fairly common method of torture/execution in ancient times.  They also fail to mention that nearly every major religious system before Christianity had a savior figure who was here to redeem humanity in the eyes of the god(s), who was executed, often by crucifixion, who died and was reborn again a few days later, following an excursion to hell/the afterlife, and then ascending into heaven.
These are just a few of the details common to all these myths.  The Christians did not have any originality when they created the myth that showed the divinity of a man named Jesus.  Most of these previous saviors had virgin births, did the same miracles, and even gave the same teachings.
Among the previous incarnations of this myth were Krishna (India), Attis ( Phrygia), Mithra (Persia), Quexalcote (Mexico), Tammuz (Syria), Indra (Tibet), and many more.  All of these saviors supposedly lived at least 400 years before the claimed birth of Christ.  There are countless more examples.

Many were born on the day which Christians celebrate Jesus’ birthday, had stars point to their birthplace, fled from death as infants, etc.  The similarities point to a mythological and archetypal need for such a savior story.  It shows more about how humans see themselves and their inner struggles that it does about some specific belief structure.  This is something we all share, from today to 4,000 years ago.  Humans have not changed much since ancient times.  We have the same brains, feelings and intellect that we have always had.
Too many people make the erroneous and self-obsessed assumption that modern man is greater in all aspects to ancient man.  This is a bias that needs to be shed, along with blind obedience to myths and fables.  It would be nice for more people to read this book and broaden their knowledge base, to better judge the lies told to us by those that wish to control us with fear of punishment in some sort of hell, or the promise of some reward after death.  To give such power to people who are deluded, as deluded as someone who imagines that rocks speak Klingon or that the world is an illusion crated by the sad clown in the painting over their dining table, is unconscionable.  To buy into their delusion is stupid as fuck, right?  People are all too willing to do so if it provides a semblance of meaning to their lives.

(This book can be found in .pdf format here:  http://www.jrbooksonline.com/PDF_Books/16CrucifiedSaviors.pdf )
Posted by Rob Instigator