The CRYPTOCRACY is out there and they are waging war on your psyche. 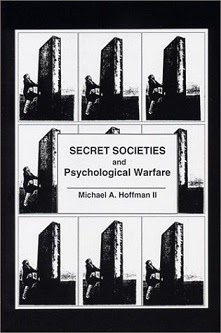 As I read further and further into the world of the fringe, I find many books like this one, which use countless unrelated examples of what the writer perceives as truth to bolster the claim that a specific group of people have been controlling everything about humanity for thousands of years.  The thing about books such as these is that, for all their hyperbole, and wild accusations, there are many nuggets of truth to be gleaned from them.  It is tricky to determine what is valid and what is pure supposition.


Mr. Hoffman labels the leaders of this shadow world the cryptocracy, because of their efforts to hide their true purposes behind seemingly normal aspects of our daily life.  Of course, this leads to connections (sometimes completely spurious) between Free Masons, Egypt, Sirius, aliens, nuclear weapons, government officials, subliminal advertising, modern technologies, etc.  While all these things do exist, and are interesting in their own right, writers such as Mr. Hoffman weave them all together as if they were tentacles from the same octopus.  Once you see a few “connections” the mind begins to connect everything it can.


The human brain is a pattern recognition machine of the highest caliber.  It finds faces where there are none.  It sees causal connections where pure randomness is actually at play. Personally, while I am draw to writing such as this that seeks to uncover what is normally hidden, I find that much of the motivation for these supposed conspiracies would be better ascribed to the old love of money and power.  People in power use money to maintain it.  They will do whatever they want, and because of their wealth, are above the law.  The richer they are, the easier it is to pay or coerce the law to look the other way.  The acquisition of money and power is a far more realistic and probable aim of the supposed “cryptocracy” than any grand plans to genetically modify humans as a slave race.  Genetics are unnecessary for this result.  A hungry mouth is a mouth concerned with where its next meal is coming from, not with what those in power may be doing.


Societal control definitely exists, from government propaganda, to entertainment and the values it teaches, to religion and the lies fed to the masses in the name of salvation.  Because of this it pays to listen to what the fringe has to say, but independent research is also required to judge what the fringe says.  Sometimes they are correct.

(This book is available in .pdf format here:  http://downloads.umu.nu/Books/Michael.A.Hoffman.II--Secret.Societies.And.Psychological.Warfare.%5B1992%5D.pdf )
Posted by Rob Instigator