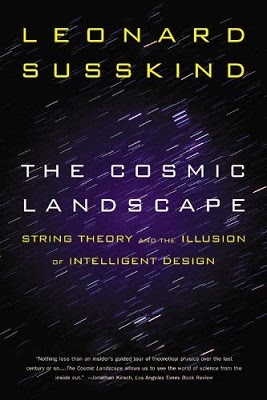 The Cosmic Landscape: String Theory and the Illusion of Intelligent Design – Leonard Susskind (2008)

Having read “The Black Hole Wars” I grabbed this other book by Leonard Susskind.  This one deals with what seems on the surface to be evidence of planned design, or an intelligent creator, but is really just a result of ignorance on the part of those that see these things.  He discussed how the very chaotic nature of existence is hidden by the many examples of order and how this leads humans to imagine that there is some sort of reason for everything existing, some sort of guiding hand in the workings of nature.  Humans seek pattern in everything because that is how our brains are wired.
Susskind uses the cutting edge of theoretical physics to show the lie of the Anthropic Principle.  In looking for the reasons why life exists, or why the Universe is the way it is to allow life, some philosophers have postulated the Anthropic Principle.  This states that the Universe is the way it is, and the laws of physics are what they are, because they have to be that way to produce life.  The reason we exist is because the Universe was set up to have us exist.  It goes deeper than this simplified paraphrasing but it is a circular argument.  It assumes that the reason the Universe is as  it is because it “had to” be that way in order for us to exist and see the Universe for what it is.
Susskind shows how, using the mathematical string theory of which he was one of the founders, the existence of infinite universes seems likely.  This means our Universe is not special, or especially made to suit life, but that instead we happen to live in the Universe where conditions for life are favorable.
Countless other universes must exist that do not have the proper conditions for cellular life, much less intelligent multi-cellular life forms.  It is a very interesting idea and mathematically valid.  This brings to mind the contemplation of life on Earth.  In our current knowledge of the Milky Way Galaxy, we estimate several billion stars, most of them having planets of some sort.  Let’s say that makes 200 billion planets in our galaxy alone.  The idea that because Earth has life there must be life around many other stars is a statistical fallacy.  If you calculate even the most generous odds against life forming on Earth, counting only the six or seven most crucial aspects for life (such as the location of our solar system, the type of star we circle around, the Earth’s Moon and it’s location in space, our Earth’s axial tilt, etc.) the odds are quite staggering against life!  Based on those odds it is likely that there may be only one in a billion planets capable of making life.  It is a whole other level of intricacy to determine the odds that stability, time, not to mention the risks of catastrophe, such as asteroid impacts, nearby supernovae, and all other factors allowing cellular life to the billions of years it took to evolve into intelligent, “conscious” life.  It is quite likely that Earth is the single planet in the Milky Way capable of harboring life.
The immense unlikelihood of our existence is what feeds the Anthropic Principle.  However, it is a very different thing to state that, for example, a tongue can taste sugar because it evolved after plants had created sweet fruit in order to better enjoy the fruit, than to say fruit (which evolved hundreds of millions of years before our tongues) is sweet because otherwise our tongues’ sugar-detecting capabilities would have nothing to experience.


Religions use old variants on the Anthropic Principle to push their lies.  They teach that the Universe is how it is because some gods/beings created it for us.  That is as selfish an idea as humanity has ever come up with.
Posted by Rob Instigator