Hitler was far crazier than we will ever know... 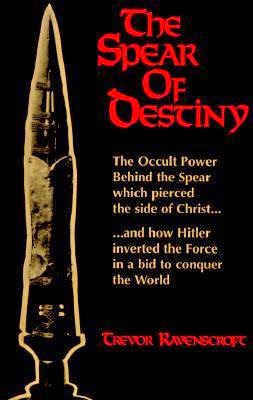 "The Spear of Destiny: The Occult Power Behind the Spear Which Pierced the Side of Christ" by Trevor Ravenscroft (1982)

I found this book at the Friends of the Houston Public Library annual book sale, my favorite book sale of the year!  While this book is nominally about a relic, referred to as “The Spear of Destiny,” “The Spear of Longinus”, and other names, it goes into much more than just that topic.
The Spear is supposed to be the lance that was thrust into Jesus’ side when he was crucified to determine if he had died.  According to non-biblical Christian lore, the Roman Centurion was named Longinus.  He is not mentioned by name in the Bible.  Supposedly, this spear, due to its contact with Jesus, grants it’s possessor near-infinite occult powers.  This book deals with the assertion that Adolf Hitler sought out this relic, had it brought to Germany when he rose to power, and used it to further his occult studies and to help him rule the world.  Like many such power relics of legend, it magnifies the intent in the “heart” of the person who owns it, and it can be used for great evil as well as good.

I have always lived by the idea that, while some things are claimed to be supernatural, it is not whether  that is true that is important, but whether someone believes that it is.  This grants things power.  The writer of this book claims contact with a man who escaped Nazi Germany and supposedly helped the Allies against Hitler, specifically in their occult “war” against him.
Much of the book deals with the interesting yet quasi-factual background history of the Spear, tracing its ownership through the years down to the Hapsburgs, who stored it in an Austrian museum along with other relics.  This is where Hitler first saw it while living in Austria in the early 1930’s.  It is quite a delirious read, for fantasy, history, myth, and esoteric knowledge all come to play their part in the story.
Having read it, I can definitely say that I am even more glad that Hitler is dead.  Ha!  Also, that the world is far crazier, and far more full of people who believe deeply about the weirdest fucking things, than one can imagine.  Legends are legendary for a reason.  They empower those that believe.  Hitler fully believed that his insanity was perfectly sane.  He believed that he was the reincarnation of a legendary Teutonic leader, that the Aryan people were the original unblemished humans, and countless other jacked-up shit.  It is strangely ironic that someone who was so vehemently opposed to the teachings of Jesus (and Mr. Ravenscroft goes into detail about this), would seek to wield ultimate power from a weapon whose legend was fabricated to honor Jesus.  Longinus supposedly repented, after having pierced the side of Jesus and seeing not blood but water coming out (a miracle!), giving up his clothes and title as a centurion and becoming a Christian on the spot.  For this he is venerated as a saint in the Catholic Church.  It is all a story made up maybe 600 years after the fact but it makes for a good fable.
Hitler, like all megalomaniacs, used anything and everything he could get his hands on to further his selfish desires and propagate his evil of unprecedented proportions.   Beware of any fucker who follows the maxim “the ends justify the means,” for they will sell their own mother to their enemies to be ground up for dog food if it helps them achieve their goals.
Posted by Rob Instigator