Harry Houdini is the GREATEST 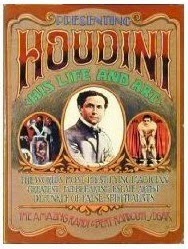 For a long time as a young kid Harry Houdini was my idol.  He may have died decades before I was born but I would read anything I could find about him.  There were some really great children’s books that talked about Harry Houdini’s life and I loved them.  I have read several books about Houdini, but many are full of Mr. Houdini’s disinformation about himself.  He was a self-created man in every way.
Who better to write a great book about the life of Harry Houdini than a magician?  The Amazing Randi is up to the task.  Not only is James Randi a famous magician and conjurer, he is a magic historian, a professional debunker, and a Houdini fanatic just like me.  The amount of diligence he brings to this book is greatly appreciated by me!
Randi explores the early life of Harry Houdini, drawing upon his vast personal collection of Houdini memorabilia.  He sheds the persona and myths created by Houdini himself, and shares how much hard work went into Houdini becoming a world-wide sensation.  The book is stuffed full of photos and interesting side notes and it is a hell of an awesome thing.  I learned more about Houdini than I thought possible, and it only made me admire him more.
Houdini was not just a master showman, but he was a genius at creating new illusions.  So many hacks would steal his tricks and illusions that he was forced to constantly create new ones, or innovate on older ones, so that the fickle public would keep loving him and attending his shows.  Shit don’t change!  The public is always after a new fix.

This book shares everything it can about Harry Houdini, from his triumphs to his failures, and I am glad that James Randi took the time and effort to write it.  I am also very glad for the Inter-Library Loan Department at the Library I work at for allowing me to check this book out from a Library in California!
Posted by Rob Instigator