Before Ripley's Believe it...or Not! There was Charles Fort! 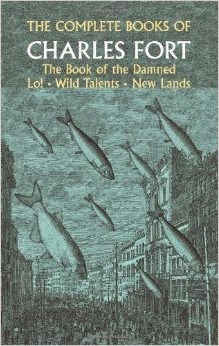 Charles Fort was an odd man.  He spent much of his life collecting news clippings, stories, articles, and anything else that mentioned strange occurrences, especially those of the natural world.  This was at a time when the newspapers had two or three editions daily, and each city had multiple newspapers.  Every bit of interesting info was published somewhere and Mr. Fort collected them all.  He would also frequent the main New York City Public Library reading old scientific journals and other periodicals from around the world.  He collected and made notes of any anomalous phenomena that could not be explained by the science of his time.  This led to the writing of several books, including classics like The Book of The Damned, New Lands, and Lo!.
These books made Charles Fort something of a cult figure and his name is now tied to any such anomalous phenomena.  It is referred to as “Fortean” or as “Forteana.”  Mr. Fort was the first to collect all these stories, and he helped make skepticism about dogmatic science grow.  This book contains three of Charles Fort’s works compiled into one volume.
His first book, “The Book of The Damned,” begins with these lines,
“A procession of the damned.  By the damned, I mean the excluded.  We shall have a procession of data that Science has excluded”
I had read a lot about Mr. Fort and his legacy but reading his work and “hearing” his sardonic voice in my head helped me to understand the humor inherent in his writing.  Sometimes people that follow Fort do so with no humor, which is sad, since so many anomalous things are so funny and weird.  Many of the so-called Forteans would be better served understanding how critical the humor is to the whole process.

One of the best things about reading Charles Fort’s work is that it reminds one to keep an open mind because we know surprisingly little about the world around us still, and that mystery is never far away.  I am always attracted to the sardonic, the cynical, the irreverent, and Mr. Fort is a personal hero of mine, for he was just one man and his obsession, inspiring countless thousands for generations.