Isaac Asimov tackles the biggest book there is 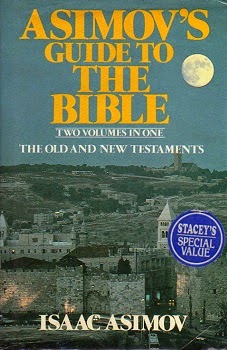 Another heavy hitter!  I love this book!  I love Isaac Asimov!  He is another of my heroes.  The man was a genius who could write the greatest of science fiction and also the most well-rounded non-fiction books on seemingly any topic.  He was extremely prolific in his output and exceedingly vociferous in his personal reading.  All in all, he was one of the greatest to have ever lived, in my not-so-humble opinion.
What I love about this book is that Mr. Asimov has taken on one of the densest and most widely read books of all time, the Bible.  Being a freethinking atheist of the highest order, Mr. Asimov does not focus on the theological aspect of the Bible tales.  He instead explains the geography, history, myth, and legend as described by the Biblical writers.  He uses Biblical research and Biblical archeology to shed light on the obscure tribes, locations, and events described in the Bible.
As a frequent attendee of Sunday school in my youth (against my wishes) I was always disappointed in the inability of the “teachers” to explain who exactly people such as the Pharisees, Maccabees, Hittites, etc. were, and what their places in the history of the region were.  I was also constantly rebuffed from asking why the Bible, the supposed be-all and end-all of all shit, never mentions things like dinosaurs, North or South America, China, India, etc.  It really frustrated the people who were doing their best to indoctrinate us in their bullshit collective delusions about religion.  After a while, (around age 12) I only continued going for the free donuts.  I wish I had this book back then!  It would have made the history and tribal tales of the Old Testament much more real and interesting!
This book is a BIG book, bigger than the Bible itself, and I am honestly only about 300 pages in.  It will be a lifelong read for me and I look forward to it.  It is endlessly fascinating to me.

One of the most enlightening parts I have read so far was when Mr. Asimov discusses the legend of the Garden of Eden.  When the tribes that eventually came to define themselves as the Hebrew people were first coalescing, and crafting their communal myths, a separate kingdom rules the area around what is now Palestine/Israel.  In the language of those people “Eden” means “grassy plain,” and it referred to the grasslands between the mountains of the Arabian Peninsula and the Red Sea.  This was the original stomping grounds for the nomads who became the Hebrews and when they wrote down their oral legends and myths, they assigned the name Eden to the original home of their people, couched in mythological terms of course.  By the time the Hebrew scholars were writing these tales down, they had been passed down orally for centuries and the knowledge of the original people and language the term “Eden” came from was long-forgotten.  These types of facts, historically verifiable facts, are never taught in Sunday school because they would defeat the purpose of their brainwashing efforts.  I love Isaac Asimov!
(To read or download this book in PDF format click here: Asimov's Guide to the Bible )
Posted by Rob Instigator