I love tell-all books, especially when they show psychics, mind-readers, and mediums as the criminal con-artists they are 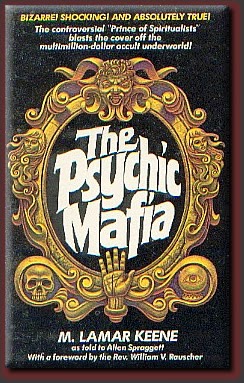 Hell yeah.  This is a bad-ass book!  How I love to stumble across books like this!  The Psychic Mafia is a detailed, frank, and incredibly eye-opening recounting of the methods, technologies, and subterfuge used by so-called psychics to fleece their victims of their money.  It straight-up tells the harsh truth that these con-artists work so hard to avoid exposing.  If everyone was assigned this book in school the vast majority of scam-fuck “gypsies”, palm-readers, psychics, and mediums would be out of business, leaving the world a much better place.
The writer of this book, M. Lamar Keene, was himself a huckster psychic, and received death threats from the organized crime factions that control the “psychic” trade, forcing him to disappear.  Here is how James Randi describes this in his book, “Flim Flam” which will be covered in a later post.

“In 1976 Lamar Keene, a spirit medium who had bilked thousands of Florida residents out of their fortunes, decided to give it up.  He confessed all to the IRS and to readers of his book, The Psychic Mafia.  In 1977 I interviewed him and discovered that he knew very little about the more subtle methods of chicanery.  He explained to me that he didn’t need to know much.  Anything he did would serve to convince the faithful, he said.  They fell for the most transparent ruses, many of which were thought up on the spur of the moment, and he and his fellow charlatans laughed themselves silly, at the end of an easy day’s work, as they recounted how simple it had been.  Keen’s book caused a storm in spiritualist circles.  Threatened by phone and letter, he moved from place to place to avoid his former friends in the business, who told him they were out to get him.  He went into the import trade, changed his name, and hoped to settle down.  But his book was not wrongly named.  One night, as he emerged from his shop, a car pulled up and shots roared out.  Lamar Keene fell to the pavement, hit in the midsection.  As of this writing he is recovering after long hospitalization.  His “friends” had attempted to make good their threat.”

In this book he exposes the many ways psychics fake their visions, cheat people, and research their marks, using the “pigeon’s” own gullibility and “will to believe” against them.  It is a brutal thing, to prey on people when they are at their most vulnerable, when they have gone through trauma, lost loved ones, suffered terrible events, etc.  These psychics, ALL OF THEM, are experts in human psychology and they all share trade secrets in an underground network of connected grifters.  Fucking horrible.  They fleece the people for money and power, and all the while they laugh about it all behind everyone’s backs.

Mr. Keene goes into great detail showing the methods and debunking the claims with honest scientific information.  It is really infuriating for me to see people blindly follow the “advice” of these fucking con-artists.  So pathetic.  People are dumb as fuck and want to believe anything which may comfort them, or take blame away from them for their actions, if it sounds “right.”  This shit enrages me!
One of the greatest magicians of all time, Harry Houdini, sincerely believed in Spiritualism and mediums, until he began to frequent séances and readings in an attempt to contact his dear, departed mother.  He saw that every single one was a charlatan, using the same tricks he used, but to fool people into thinking their dead relation was communicating with them, not for entertainment.  He spent the last 30 years of his life visiting all the psychics he could in order to debunk their claims.  The sad truth of human gullibility and stupidity is that even after all the facts are laid out, after being told exactly how the psychic managed to fool them, they would continue to frequent them.  That is straight insanity. Only a desperate person would continue to visit a quack after being told how they have conned you, and psychics rely upon this desperation to steal your money.  Sadly, there are many such pathetic fools out there in the world, willing to hand over their hard-earned money to someone who tells them that “mommy forgives you.”  All the religions of the world have become rich as fuck following this exact same method.

(This book can be read/downloaded in .pdf form here: http://files.meetup.com/1509795/ThePsychicMafia.pdf )
Posted by Rob Instigator