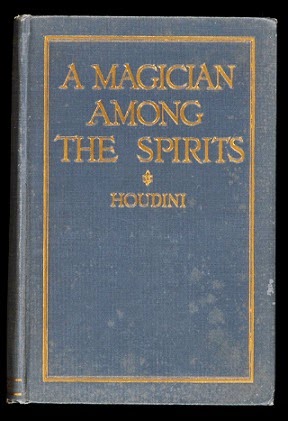 A Magician Among the Spirits – Harry Houdini (1924)

Houdini is The Man!  I have already written about Harry Houdini and my idolization of the man here.  This book, which I found in the stacks of the Library I work for, is one I have wanted to read ever since I learned of its existence decades ago.  In this book Harry Houdini details his decades of exploration in the world of Spiritualism and psychic mediums.
Houdini’s foray into Spiritualism began from a deep love of his mother, the single most important person in his life, an immigrant who never learned English and sacrificed so Harry’s brothers and sisters could have a better life in America.  When she dies it really broke him up.  She lived to see him gain worldwide fame.  At that time, Spiritualism was in vogue in the USA, and mediums/psychics of all types were offering séances in which one could supposedly communicate with the recently dead.  Houdini began to seek these people out in an attempt to talk to his beloved mother, only to find that every single one was a full-on con, using all manner of tricks and lies to fool desperate people into giving away their money for a chance to chat with dear ol’ Uncle Larry in the afterlife.

This, as you can imagine, made Harry Houdini irate.  He spent the remainder of his life visiting every medium he could, and educating the public about the deep bullshit they were being fed by these grifters.  This book describes his endeavors, and every manner of trick, sleight-of-hand, and psychological gambit utilized by so-called Spiritualists.  The sad part is that even 100 years after this, our society still accepts these hucksters with a winking eye.  The police bunko squads rarely raid these fuckers, and the truly charismatic ones are paid millions to do their song and dance on television.  Accepting the lies told by someone under the pretense of entertainment, or harmless fun, is a severe disservice to all of us.  Houdini would be rolling in his grave at the stupid sheep credulity of the ignorant masses, if he had not already escaped the shackles of a locked casket.  Ha!

(This book can be read in .pdf format here:  http://www.cse.dmu.ac.uk/~mward/A-Magician-Among-the-Spirits-1.pdf )
Posted by Rob Instigator