My childhood love of comic books was good for something! 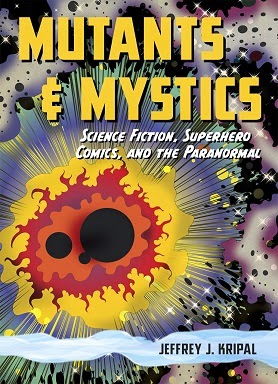 This book was another one that I stumbled across as I browsed the shelves containing the comic books in the Library I work at.  It deals with a couple of inter-related themes.  One is the idea that at the beginning of the 20th century the fringe of “Art,” science fiction and comic books were the one art form that actively foreshadowed the future that humanity experienced in the 20th century.  The second is the study of how the experiential aspect of reading comics or sci-fi ties in with the paranormal and the creators of these books and comics.  It is quite an odd book full of intriguing new ideas and I found it very interesting.

The best parts of the book are where the author discusses synchronicities that abound between themes in comic books and events in the world.  While many people of various backgrounds claim that we all create our own Universe, it is something else to see so many anecdotes confirming this idea. From writers and artists who crafted stories in their comics that eventually occurred to them in real life, to visual artists portraying things drawn from their imaginations which came to pass years later, the arts have functioned as an early warning system of sorts of the big issues facing humanity.
I love reading about the lives of comic book creators of whom very little is known.  I also love anything that lends legitimacy to an art medium that normally is treated like a bastard by the art world at-large.  Much of this book deals with the author’s contention that humanity creates art that deals with the big things going on in the culture. Ideas such as the mytheme of “Mutation” are frothing in the culture’s subconscious until they are given a name that then allows the culture to absorb these new, consciousness-altering ideas.
(Mytheme is the author’s word for a myth meme.  A meme is the smallest core of an idea that, once created, proceeds to grow and spread as if it were alive in the minds of humans.  It is NOT a picture of a kitty with misspelled words superimposed on it.)
Comic books, with their blend of art and literature, have been around in some form for hundreds of years, maybe thousands.  The populist nature of them allows comics to discuss topics and ideas that otherwise normal people would never consider, thereby expanding their minds in the process.  I know many of the comics I read as a youth introduced me to themes I still explore in my adulthood.  I am very glad I came across this weird, beautifully illustrated book!
(An excerpt of this book can be read here: http://www.itp-international.org/sites/default/files/MutantsAndMysticsExcerpt.pdf )
Posted by Rob Instigator