Star Trekkin' Across the Universe... 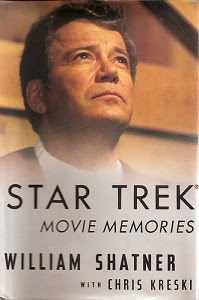 I am a Trekkie.  I am also a Trekker.  I am also, and most wholeheartedly, a NINER!!!!  I love Star Trek and most of its iterations, and I think of the characters as old friends.  The original Trek, the one that started it all, was a childhood favorite of mine and I loved Spock and Kirk and Bones as three co-workers who were also close friends.  When they began making the movies I was too young to go, and so the first one I saw in theaters was the 3rd one, “The Search For Spock.”  Since then I have seen all the movies many times, even the dreadful last one starring the Next Generation crew led by Captain Stuffy, I mean, Captain Picard.

This book is a memoir of William Shatner’s experiences of the creation and filming of the first six Trek movies.  William Shatner recounts the many twists and turns it took to even bring the first film to the screen.  At the time, Star Trek had been off the air for 4 years, and William Shatner had moved on to other work, seemingly leaving Capt. Kirk behind.  It is hard for many to differentiate between the actors and the characters they portray.  Reading Shatner’s tale of how his life was at the time of the first film is eye-opening and very cool.
Shatner goes on to describe his experiences filming all the movies and working under Nimoy when he directed several of the Trek films.  Eventually Shatner managed to convince the people in charge to take a chance on him as a director.  It is a cool story.  I learned an awful lot about the background of some of my favorite movies, especially the juicy details of the filming of Star Trek II: The Wrath of Khan, my favorite!  I, for one, do not fault Mr. Shatner’s ego, something many people criticize him for.  In my mind, one’s ego is all one has sometimes when the rest of the world is telling you that you suck.  Fuck them.  There is only one Captain Kirk, and there is only one William Shatner.
Posted by Rob Instigator