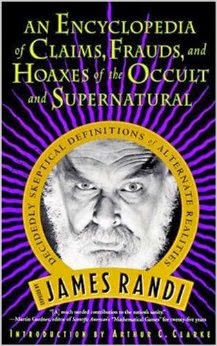 An Encyclopedia of Claims, Frauds and Hoaxes of the Occult and Supernatural – James Randi (1997)

Ahhhhh, yet another dense reference book to flood my mind with data.  I love it!  In this book James Randi details centuries worth of frauds involving the occult and the supernatural.  Everything from the Loch Ness Monster hoaxes to lying mediums faking ectoplasm to Sir Arthur Conan Doyle’s credulity when shown obviously faked images of fairies is explained and described.  It is amazing stuff.  I am glad that someone collected all these things in one volume, and now it is available for free online with extra illustrations!
Here is an example from the encyclopedia dealing with the currently popular “ancient astronauts” theories.
“Ancient Astronauts – There is a theory that thousands of years ago, civilizations from other star systems visited Earth and gave early man information to assist in his development.  The idea seems to be that folks used to be pretty slow-witted and had to have help to develop such clever stuff as the wheel, bricks, and cudgels.
Evidence has been offered by many writers, particularly by best-seller Von Daniken and none of it is convincing when the actual facts are determined and examined even casually.  The theory is presently promoted by tabloid newspapers, sensationalist journals, UFO periodicals, and other fringe-science entities, but holds little interest for serious researchers.”

I applaud the efforts of James Randi and hope that more people stop focusing on nonsense and instead use their energy towards endeavors which will actually benefit humanity and the planet Earth in general.
(This book can be read here: http://www.randi.org/encyclopedia/encyclopedia.html )
Posted by Rob Instigator