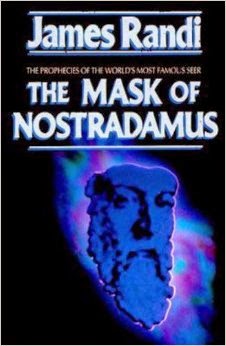 The Mask of Nostradamus: The Prophecies of the World’s Most Famous Seer – James Randi (1993)

Oh James Randi.  You fight the good fight and the dumb-asses still won’t listen.  Nostradamus is the single most famous prognosticator of recent history.  His obtuse quatrains are so vague and meaningless that they are fodder for every sort of claim the kooks wish to superimpose on them.  This makes it very easy to claim Nostradamus predicted whatever you wish to imagine.
James Randi has taken up the grand fight to combat the ignorance spread by the lunatic fringe.  Houdini tried 100 years ago and failed.  In this book, Mr. Randi takes on the big dog.  He explores the history of Nostradamus and his quatrains, their creation, and the subsequent hype machine which made everyone believe that Nostradamus was a mystic of the highest order.  Quatrains were altered to suit people’s needs in the centuries after his life.  They were forged outright by the book publishers who needed new volumes to sell to the gullible sheep that ate this crap up but had already exhausted the originals.  James Randi details all of this with humor, righteous indignation, and diligent research.

If only people would read this book.  I know they will not, especially since a whole cottage industry makes serious money off of the name Nostradamus and his nonsense verse.  The worst part is that, as the saying goes, “Hindsight is 20/20.”  Almost no one ever focuses on psychics/seers failures, instead championing the one time out of a hundred where it appears they predicted something correctly.  Theoretical physicists make predictions based on their theories all the time that turn out to be empirically true, but are never given as much attention as a “psychic” predicting the death of a President, or that so-and-so celebrity will be married next year,  These scum are the worst.
Posted by Rob Instigator