Violence and it's origins have never seemed more dull 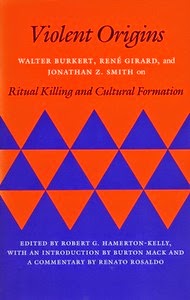 Human history and pre-history are both littered with violent, ritual killing.  Everything from the sacrifice of humans and animals, to the “killing of the King” has taken place in our humanity.  Many people have debated whether this is a result of human consciousness, or because of human society, but no one is close to a definitive idea about this, or even which came first.  The three authors of this book have three separate ideas about ritual violence, and this book is a collection of their work and their interactions in discussing their ideas.
While the ideas are compelling, and the way they argue is interesting in a clinical way, this book is deeply dull.  It does not hold interest and it constantly bores the mind with endless re-statements of the same ideas.  I need to find a book that will go into these theories a bit more.

Humans are capable of insane levels of violence and cruelty in their rituals.  I once read that the stories of sacrifice in the Bible are analogies describing man’s ascent in morality, from the sacrifice of animals to appease god (think Cain and Abel, and Abel’s accepted sacrifice of a living animal as opposed to Cain’s rejected sacrifice of produce and veggies), to the intensification to human sacrifice, (think of the story where Abraham is going to sacrifice his son Isaac at the command of god, but he is then stopped by god from finishing the sacrifice.) , to the eradication of sacrifice of any kind, (Jesus, god incarnate, offering himself up as the ultimate sacrifice to end all sacrifices).  I would like to read a study of this.  Oh well.  Maybe I should just write one myself.
Posted by Rob Instigator