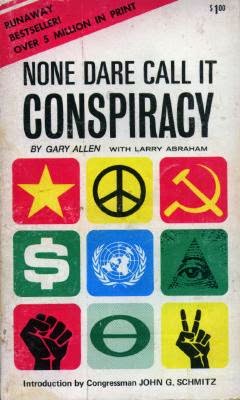 How you imagine the world’s governments are run is not the truth.  It is a façade designed to keep the population from focusing on who really is making the large decisions we supposedly elect people to make.  In this book, the authors shed light on exactly what and who are running the United States.  Mr. Gary Allen is an investigative journalist and has written the truth as he has seen it.  It is an extremely important book, and should be read by anyone interested in “sociopolitics,” or the politics at play above the fray of our “regular” politics.
The scary fact that these things were exposed in 1971, and that everything still functions in the exact same way really freaks me out.  All the “nuts” who see bizarre conspiracies everywhere do so because they do not know of the true overarching conspiracy that keeps us all dumb and ignorant.

“In politics, nothing happens by accident.  If it happens, you can bet it was planned that way.” – Franklin Delano Roosevelt

This quote from FDR applies to both the good things and the bad things that happen in politics.  Everything’s pre-planned, and everything’s covered in political gauze to ensure that no one knows who is really pulling the strings.  It all comes back to the control of resources, control of wealth, etc.  Money is the only thing that matters.  I wish I could describe in detail the contents of this book but it is better if you read it yourself.  Read it and ask yourself what it means for all the insane shit that has gone down since this book’s writing in 1971.

(This book is available to read or download in .pdf format here: http://www.ldsfreedomnetwork.com/none-dare-call-it-conspiracy.pdf )
Posted by Rob Instigator