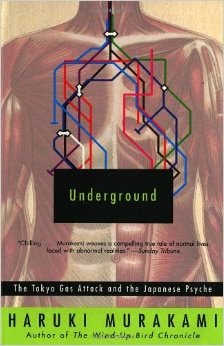 My man Elliott French got me into Haruki Murakami when he lent me the book A Wild Sheep Chase.  Man, was that an odd book!  Mr. Murakami has since become world famous for his great novels and short stories.  When the cult Aum Shrinkyo attacked the Tokyo subway with Sarin gas, it caused a national freak-out.  Murakami wanted to explore not only why it happened but how the culture of Japan helps create such lunatic fringe groups.  He sought out victims of the attacks, both civilian as well as civil workers, and interviewed many of the Aum members involved in the attacks as well.  His collected interviews are what make up this book, Underground.
The stories are harrowing in that what was otherwise a normal, but busy, day in the Tokyo subway became a nightmare of death and chaos.  The Aum members detail their involvement, and discuss their feelings about it all.  The victims describe their day, and the aftermath they experienced in the days and months after the attacks.  Many of them suffered not just from the Sarin gas but also from psychological trauma related to their inability to work in the months following.  They express deep contempt, not for the Aum people who they see as misguided fools, but for the national government and media who created a circus of bullshit surrounding the attacks, further damaging these people’s lives.
Japan is a very strange place.  Personal privacy is highly valued.  Social order is at a premium, but an attack like this reduces all to victims.  For many, it is something they wish to forget and move on from.
Many of those that died did so because there were no adequate paramedic responses to the crisis.  Doctors at the E.R.’s did not even realize it was a Sarin gas attack for hours, mistreating the symptoms and increasing the victim’s suffering.  Others were poisoned by the gas but mistook the symptoms for allergies or a cold and went on to work!  This is a sobering and heavy book, but oh so excellent.

It made me admire Haruki Murakami even more.  He lets people speak for themselves, and does not include his own questions in the narrative.  This makes it more personal, as if the victims are speaking directly to the reader. Great stuff, and highly recommended.

(This book can be purchased here:  http://www.harukimurakami.com/book/underground-the-tokyo-gas-attack-and-the-japanese-psyche )
Posted by Rob Instigator