Life was so much harder back in the day. Be thankful that you live in the NOW! 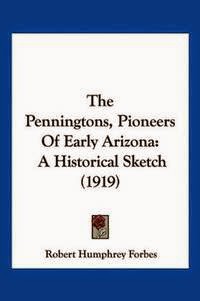 I am not sure which book I was reading which mentioned this account of the Pennington family’s ordeals in heading out west and eventually settling in what is now Arizona.  I did a little research and found a .pdf document of this short book.  It was an engrossing and completely harrowing story.  Anytime people leave well-settled areas to stake a claim somewhere out in the wilderness they run big risks.  Back in the late 1800’s however, the risks were so many, and so brutal in their vengeance, that it is a testament to the people who made that trip and settled the West  and what they were composed of.  They were strong, independent, fiercely determined people, and the Pennington family’s story serves as a great example of their hardships.
If you are looking for the real truth about what it was like for a family to seek a new home out in the unpopulated parts of North America, this is for you.  The poor Pennington family survived hardships ranging from Indian attacks, theft from bandits, disease, near-starvation, and the brutality of nature at its most raw.  One story that sticks in my mind is from one of the Pennington daughters kidnapped by a band of natives.  At one point she is beaten, shot, stabbed, and left for dead miles away from the nearest settlement.  Her scalp was gashed open, and she still managed to crawl and make her way for miles eating snow and hoping for rescue, losing blood all the while.  When she was found days later by a search party they almost shot her on sight, for she looked like a monster.

A lot of praise is given to men who settled the west but the women were the truly strong ones.  They had to support their men and care for family and defend the home when the men were away.  The immense cojones that it took for all these people to keep trying, to keep moving to a new area hundreds of miles away in search of a better life, is inspiring and humbling.  It is nothing like the movies.