The evil that men do is hard to explain sometimes 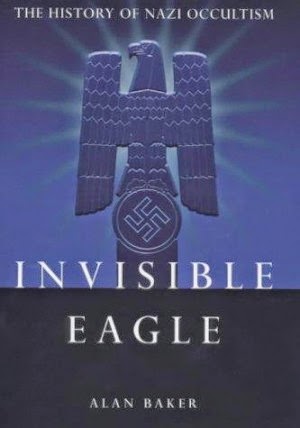 It is very difficult for normal humans to understand what can drive a group of people to commit unspeakable atrocities and horrors against other humans.  When such twisted and malicious ideas become national governmental policy?  Even worse.  The National Socialist government of Germany engaged in such atrociously clinical and rigorous genocide and mass murder that even today, 60-plus years later, people still seek the reasons behind such actions.  How could this happen?  How could a country that has always been at the forefront of rational science and philosophy get taken over by a megalomaniac whose inner circle drove all of Germany to some of the most insane acts ever committed?  It is a question that people will grapple with for a long time.  Many people, however, are convinced that the pure evil on Nazi ideology and actions had to come from something more sinister than the human mind.  This book explores the many claims laid out by people over the past decades seeking to explain this evil.
One of the most common claims about Nazi Germany is that from the top down, it was a fully satanic endeavor.  Others claim that the Nazis were involved with deeply Occult matters that fueled their insanity.     Still others assert that Hitler did not kill himself, and instead escaped to a secret base in Antarctica where the Nazis had discovered some mystical secret.  Each of these things, while implausible, seems to help those who claim them as real to rationalize away the evil perpetrated by Hitler and his assholes.  It is too scary to imagine that a roomful of supposedly well-educated governmental leaders could just come up with the horrors of the Holocaust while sipping tea and enjoying some classical music.

It is indeed true that certain members of Hitler’s inner circle, especially Heinrich Himmler, were deeply obsessed with certain occult and esoteric ideas such as Theosophy, the Ice World Theory, and other crack pot ideas that were all the rage in the late 1800’s and early 1900’s.  These bastards used these borrowed ideas to shore up their claims of an ancient Aryan master race that was diluted and “mongrelized” by interbreeding with the “lesser” races of the Earth.  They also shared a deep anti-Semitism which condensed itself into the most horrific attempted genocide of recent times.  Hitler himself did not believe in these occult things, but he was perfectly willing to use their ideas in shaping his propaganda.  He even mentioned how pathetic Himmler was in his devout beliefs in the more outlandish of these pseudo-theological ideas.  No matter, for he knew exactly how to utilize them to his own ends.
This book does a great job of explaining exactly what these influences were, and how they were put into action by the Nazi Party.  It also shows the ease with which an evil idea is rationalized by those who think themselves to be better than others.  It is a slippery slope that leads from racist ideas to the notion that the “lesser” races need to be wiped out for the good of the “Master” race.  It is also easy to forget that the Nazis not only sought to exterminate the Jewish people, but to cull the homosexuals, the infirm, the mentally and physically disabled, the “mixed races,” etc., not to mention any intellectuals that did not agree with the Nazis and any person opposed to their rule.  Their evil came straight from their own hearts, and to lay blame for it on the Occult or on Satan or on some sort of vague idea is a disservice to those that suffered and died under these fucking assholes.  It also keeps us from seeing this as it happens in our own day today.  Atrocities are caused by humans, against humans.  When such racist and evil ideology is used as a governmental platform, it strikes fear in me.  It is also important to note that many high ranking and powerful members of the UK and the USA wholeheartedly supported the Nazi party with money and arms and fully agreed with their racist bullshit. We have not yet rid ourselves of the evil of racism, and we may never do so.  However, we must remain ever vigilant against racist ideas being implemented as official state policy.  That is when a small evil turns into a big EVIL.

(This book can be downloaded in .pdf format here: http://www.germanophobia.net/books/IE.pdf )
Posted by Rob Instigator