Time travel is a fun way to learn about evolutionary biology! 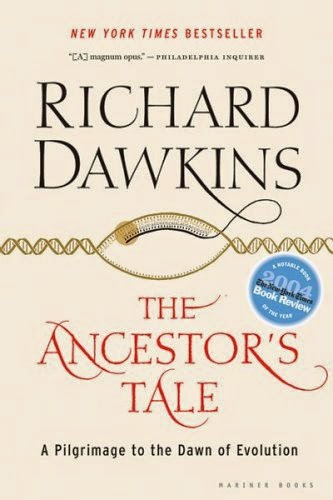 The Ancestor’s Tale: A Pilgrimage to The Dawn of Life– Richard Dawkins (2004)

Richard Dawkins is someone who riles up all the right people.  He is seen as a threat to many that wish to force everyone to follow their dogmatic belief systems based on highly suspect ancient texts.  He does not argue peacefully, as he is an enraged individual forced to live among a horde of willfully ignorant sheep.  Because of this, he is attacked both by those that oppose reason and science, and by those who think he is too harsh in his stance against pseudoscience and theological oversight of scientific matters.
One of the main sticking points for people who like easy answers to everything is the theory of evolution through natural selection.  Like most religiously dogmatic fundamentalists, they oppose evolution on the grounds that it is a lie.  They claim the truth is to be found in the pages of a Bible, or a Torah, or a Quran, or some other man-made fairy tale.  I always wonder why they are so vehemently against science and reason and logic.  If they truly hold their beliefs honestly, then no amount of opposition should bring them any upset, since their beliefs are their own and unchanging.  Therein lies the LIE, because they would not attack science or reason or evolution or biology if they did not feel their worldview threatened!  What morons!  It is like arguing with a 3 year old child.  Nothing you can say or do will change their belief that there is a monster in the closet, and he will only become more agitated the more you try to refute this “fact.”

In this book, Mr. Dawkins takes us on a trip through time.  We travel through 40 different “convergence” points, from our species, Homo Sapiens Sapiens, all the way back to the earliest known common ancestor of all current life, a specific type of bacterium.  Along the way we see the development of 4 limbs, the rise of spinal cords, the evolution of multi-cellular life, etc.  It makes for an awesome mental trip, condensed from a 5 Billion year story.  It is an excellent primer into biology and it’s infinity of form.
The best thing about this book is that it allows one’s mind to expand through the billions of years, opening up our reality tunnels to an existence that far, far exceeds the history of humans on Earth, not to mention the pitifully few decades afforded to an individual human life.  I feel that books such as this one would aid a young student in understanding natural selection a lot more than the dry data provided in school textbooks.
Posted by Rob Instigator