"Life" is a Game with Very Simple Rules 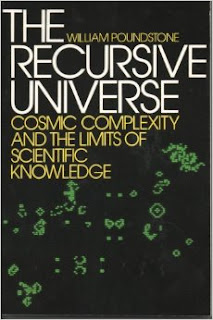 The Recursive Universe: Cosmic Complexity and the Limits of Scientific Knowledge – William Poundstone (1985)

What a difference a couple of decades make.  I first picked this book up while an undergrad and could only grasp about one quarter of the information provided by Mr. Poundstone.  I am glad that I can read it now with the necessary knowledge and background to be able to make sense of this book.
I think what confused me in my previous attempt to read this book was that Mr. Poundstone frames the titular discussion within a description and history of a computer game called “Life.”  This game, which starts with a very basic set of ground rules, can and does lead to infinitely different outcomes, some of which function much like cellular life does.  The British mathematician John Conway created this cellular automaton, in 1970.  The game consists of a 2-dimensional field, much like a chess board, whose “cells” can only exist in “on” or “off” states.  (Think binary code of 1’s and 0’s).  At every turn, each “cell” follows a specific and rigid set of rules to determine if it will be “on” or “off” in the next turn.  This goes on and on until the pattern becomes static, or in some non-static equilibrium.
Having created such a rigid system with minimal rules, Conway was surprised to see the development of patterns, growth, and complexity that resulted solely from the ground rules.  This leads the author to show how the game itself proves that exquisite complexity can arise from a very simple set of ground rules, something that scientists had debated for centuries.  Some people saw the infinite complexity of our Universe and assumed that the creation of such a wide variety of objects and energy must arise from an equally complex set of natural laws.  Others argued that the complexity evident in the Universe could result from a very simple initial state.  It was a shock to see that a simple computer game could model the extreme complexity of cellular life.
Mr. Poundstone describes the game as recursive, meaning to “relate to or involve the repeated application of a rule, definition, or procedure to successive results.”  Every “round” of the game applies the exact same rules to all areas of the “board.”  The Universe, our Universe, works the same way.  Our Universe is inherently recursive.  The wide range of experience, phenomena, and mystery in our Universe arises from the repeated application of a very small, limited set of “rules” as well.  It is these “rules” that physicists have been seeking for the past 100 years, with good results.
Having read the book, I found a version of the Life game that works on my phone.  It is so addicting!  I can create any initial state, and hit “go.”  The rules of the game itself create endless new patterns, many of which start to become familiar once you have played the game several dozen times.  Researchers have spent countless hours discovering different aspects of the game of Life that mirror our own natural Universe.  There are static patterns.  There are patterns that oscillate from one state to another indefinitely.  There are patterns that travel across the plane of the game.  There are patterns that create other patterns even!  It is super cool for a rigorous nerd like myself.
I am glad I read this book again, and I feel that it provides a great insight into the rise of complexity in our Universe.   Too many people see complexity as evidence of intelligence.  That is a shame because it stunts our thinking.  It keeps us indebted to the idea that only something greater than us could create the world around us.  It also does not impress upon people the risks inherent in any action, and how even the smallest thing can create massive complexity in its wake.  If more people understood this then maybe they would be more responsible with how they raise their kids, treat other living beings, and exploit our natural resources.

(To play the Game of Life online, click here:  http://www.bitstorm.org/gameoflife/)