Spinoza Must Have Been Angry All The Time 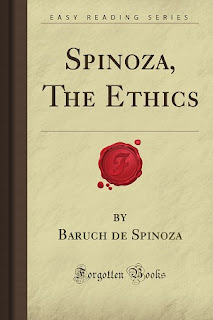 A certain issue arises in me every time I read philosophy, and it takes much effort to bypass it.  What happens is that, as I read a philosopher’s writing, I find myself frustrated because I cannot argue back at them!  I read their ideas, assumptions, and arguments and I wish I could just talk to them face to face to discuss what they have written.  I feel that I am just sitting there listening to an endless lecture by someone who is not teaching facts or data but instead is making informed or ill-informed guesses about what they feel is the reason for existence, the role of evil and good, the source of morality, and all the other unanswerable questions that they can come up with.  Even when I find much of their conclusion to be amenable to how I see the Universe, I grow more and more irritated because I am spending my time filling my head with someone's purely subjective, unverifiable, and functionally useless ideas.  Maybe it arises because I personally spend much of my brain-time grappling with those very same questions and arriving at my own answers, answers which fit my experience and my ideas.  I do not wish to force anyone to see things as I do, so it irritates me that so many philosophers take the tone of someone who has arrived at the answers and is irritated by those who do not arrive at the same answers.
Spinoza is a name that I have heard mentioned many times and referenced in countless books.  He was a non-practicing Jew living in a tumultuous time in Western Europe.  His philosophy was in direct conflict with the generally accepted religious truths of the day, which said that God was an entity separate from our base universe of matter, and that humans and all of creation were essentially pits of shit, born in sin, and waiting for divine redemption to provide a proper life after death.  Spinoza saw through that web of shit-lies and looked around at the Universe in which he found himself.   He saw the Universe as a whole as being alive, and that that Life, all of creation, is what constituted God.  He believed that because of this everything that has existed, does exist, and will exist is part of the divine.  Nothing is removed from it, and humans all possess the spark of divinity within them, by virtue of just existing.

These were very dangerous ideas at the time, and are still quite shocking to many people whose ideas of the divine are spoon-fed to them by organizations intent on taking their money and controlling their lives, much like the churches in Spinoza’s day.  He lays out his arguments for this in the same form that mathematicians used in his era to show geometric proofs.  At the time this gave his ideas the air of scientific rigor, even though it is just a device to frame his thoughts.  This makes for difficult reading at times, but must have provided some clarity to learned readers in the late 1600’s.
Spinoza goes on to discuss evil, love, morality, and all the other obsessions of the philosopher, all tied in to his pantheistic beliefs.  These ideas were very influential and helped foster much of the fight against the Roman Catholic Church of the day, which sought to enforce their dogma through Inquisitions, Crusades and torture-terror campaigns.  Many of the USA Founding Fathers held deist/pantheist beliefs which helped them create the first nation on Earth whose sovereignty was innate, without resorting to the lie that the “King” is divinely chosen and infallible, or that the state religion is the source of all the nation’s laws.  Perhaps Spinoza would have supported these aims!
Philosophy for me is better studied as society’s source for validation and to understand the sources of ideas that go on to change human history.  I do not look to it for truths.  Philosophical “truths” are only valid for the philosopher in my eyes.  I will probably stay away from reading philosophy for a while.  I don’t need the aggravation!