This Book Reminds Me of Why I Love Richard Feynman 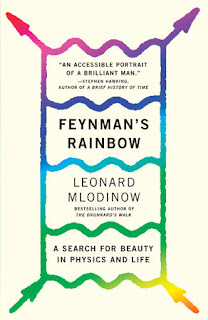 Feynman’s Rainbow: A Search for Beauty in Physics and in Life – Leonard Mlodinow (2003)

Richard Feynman.  If any single human is my intellectual idol, it is Richard Feynman.  His curiosity was boundless.  His intellectual prowess was without peer.  His imagination was powerful enough to solve problems deemed intractable by other fellow physicists.  His interests ranged from Brazilian samba music, to quantum theory, from optics to safe-cracking. To top it all off, he was a gregarious and funny man, invested with the child-like quality that allows for infinite delight at the wonders of the universe around him.  He was also quick to dismiss lazy thinking, self-analysis, philosophy, and psychology.  These fields held no interest for him.
Leonard Mlodinow is himself a wide-ranging mind, achieving renown at a young age in the theoretical physics world, and later as a screenwriter, and author. In this slim book, Mlodinow shares his experience during the first years of his post-doctoral fellowship at Caltech, where his office was next to both Feynman and Murray Gell-Mann, two of the greatest minds of the 20th century.  He details his arrival there, his experience with both of these physics giants, and how they shaped him as he grew and matured.
Mlodinow was lucky to get to know Feynman in the last years of his life.  When they met, Feynman had already endured two lengthy and arduous operations to remove cancer from his body.  While he was not as vigorous as he was known to be, his mind still sought new challenges and still railed against faulty reasoning, no matter where he found it.  Even so, this makes for a melancholy tale, especially to someone like me who did not even know of Mr. Feynman until well after his death in 1988.  What is wonderful about it is that the book becomes a tale of how Mlodinow himself came to the realizations that fueled the rest of his life through his experiences at Caltech and his conversations with Richard Feynman.
Amazingly, Feynman let Mlodinow record their many of their casual conversations.  This allows the author to include transcriptions of Feynman which are priceless to a fanatic like me!  I have heard and seen many recordings of Richard Feynman over the years and in reading these passages I could hear him speaking to me in my head.  I love when that happens.
There are very few people whose vitality and exuberance for learning and discovery can be described as “infectious.”  Richard Feynman was one of those beings.  The entire world is lucky that he existed, whether or not they know of him.  Besides, as the title of one of Feyman’s most enjoyable books reads, “What do you care what other people think?”  As Mlodinow discovers through his relationship with Feynman, all that matters is that you love what you do, and that you are excited by what you do, whatever it may be, and regardless of what anyone or anything may say about it.   Otherwise, you are a slave to someone else’s ideas, someone else’s judgements.  This is a lesson that can carry anyone forward to a satisfactory life, through all the hardships, rejections, and pain.  I hope that books like this can continue to impart that wisdom.