Borges' stories are indeed like labyrinths constructed out of words. 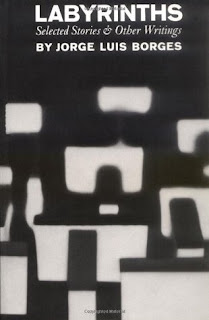 There are a few giants in the world of short-story writing.  Edgar Allan Poe is one of the first, having essentially created both the modern detective story and the modern horror story through his demented tales.  Poe’s stories are not in the vein of the gross-out, blood-filled, carnage-laden tales which are seen as horror these days.  They instead were more of the meditative, eerie, unnerving type of story.  These are the kind of tale that pull you in and haunt your thoughts afterwards, if done right.  Jorge Luis Borges is just such an author.  He made his name with short stories, poetry, and essays, and in doing so changed the world of literature.
Borges’ stories are like minimalist puzzles. They are the epitome of the old short-story writing axiom that nothing should be in the story that does not propel the story forward.  While novels allow the author countless pages to explore motivations, digressions, and setting, short stories, especially Borges’ very concise stories, need to get their point across as fast as possible, without feeling like pure plotting with no emotional connection for the reader.  Using a rich vocabulary gleamed from his far-ranging and esoteric reading Jorge Luis Borges writes short stories that feel almost holographic, as if all parts contained the whole.  His work feels like stepping into an alternate reality where the wisdom of the ancients is meshed with the troubles of the modern world.  They are not quite mathematical, as much as rigorously constructed.
Borges wrote in Spanish, and while I can read Spanish I do not have the education in Spanish needed to understand Borges’ writing without constantly interrupting myself to check a word in the dictionary.  Therefore, I have read him in translation.  This collection, Labyrinths, has made me appreciate Borges’ mind and his ability to aggregate the wisdom he encounters in his readings into his stories.  Borges was, like me, someone who preferred to read the fringes of literature, seeking and studying ancient writings, near-forgotten philosophers, and the classics of ancient antiquity.  He sought to explore the world of the Gnostics, of the Greek Idealists, of the Persian scientists, etc.  I too seek out old books and old ideas to read, and to see what wisdom or entertainment may be found within.  I enjoy learning for learning’s sake, something else I share with Borges.
Jorge Luis Borges went blind around age 47 and never learned to read Braille.  What a horror for someone whose whole life was about the joy found in reading.  I can imagine that he found it pointless to do so, as the books and literature he sought was of a type not to be found in Braille editions, which are usually just the classic canon and more modern fare.  Losing that connection to the ancient world that literature gave Borges must have been quite rough.  Someday, if my Spanish gets better, I will attempt to read him in his native tongue.  Until then, I am glad that good people took the time to translate these cool stories for me.