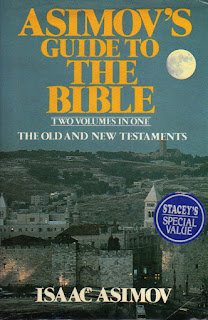 I read and reviewed the first volume of this great book, covering the Old Testament, and was amazed by the vast data contained within.  I had long been aware that the Bible as we know it is a collection of writings of many types, including poetic allegory, letters to various congregations, tribal history, collections of prayers, etc.  Reading about the Old Testament in volume one helped shine a light on the tribal history aspects of the Old Testament.  In it Asimov describes the meaning behind the many names and places found in the writings, as well as providing historical perspective which helped me to understand the political currents that underlie much of Jewish history.
Having been raised in the church, and having attended countless hours of Sunday school, this Asimov book not only resonates with its information but it provides the answers to questions I would voice in my youth but whose answers the teachers never knew.  Countless books have been written exploring every minute aspect of the theology and spirituality.  Asimov, a non-practicing Jew by heritage and an atheist by decision, does not go into the mystical or miraculous stories presented in the New Testament, but instead focuses on what has been termed the “historical Jesus.”  Reading through the Gospels, researchers and historians have found two different stories being told.  One is the story of a historical person, called Jesus, who as a learned rabbi taught new lessons to the Jews and was crucified for what they perceived as heresy.  This is the figure that Asimov explores as he travels through the Middle East preaching and gaining followers.
It is amazing to think that, of all the religions that humans have created to worship their gods, there have been very few that are considered “world” religions.  Most religions are exclusive by nature, and they serve a specific subset of humans.  Judaism is a religion whose god has made a covenant with them as the “chosen people.”  In fact, most religions before the age of Buddha were specifically tribal and the gods were seen to support one human group while fighting with the gods of other human groups for dominance.  Buddhism was the first religion that succeeded in being a world religion, a religion that anyone from any tribe or any ethnicity could join and belong to.  Christianity was the second great “world” religion, which was originally intended solely for other Jews, but which, either through the actions of Jesus himself, or his early disciples, spread to accept any and all “Gentiles.”  A gentile was any non-Jewish human, but in the times of Jesus was usually taken to mean either those Hellenic Jews that had adopted Greek customs or Greeks and Romans that had adopted Jewish customs.  Most gentiles were not circumcised as Jews were and this was a large point of contention among the early apostles.  The more orthodox among them saw circumcision as crucial to becoming a Christian, since it was the original sign of the covenant between Jews and God.  The apostles that won out however, taught that Jesus brought a new covenant, replacing all old ones, and that the covenant was for any and all who wished to join.
There is a lot of historical speculation as to whether Buddhist teachings made it all the way to the Middle East by Jesus’ time, for there is a lot of circumstantial evidence that Jesus was aware of the Buddhist teachings, and shared them in his own teachings.  It would make a lot of sense if this was the case, but the fact is that a lot of Jesus’ teachings are mirrored in many other religions theology.  What seemed to be different with Christianity is that Jesus was seen as a redeemer of all humanity.  This has allowed Christianity to spread worldwide, first taking over the Roman Empire itself within 400 years of Jesus’ birth.
One of the coolest parts of Asimov’s book is that he is such a widely read human being. He brings details and knowledge from very disparate sources to bear on his work.  I cannot imagine how much he must have read to compile the information found within his Guide to the Bible.  I highly recommend this book for anyone who has a general knowledge of the Bible but wishes to understand the historical grounding for the tales found within.  Asimov does not discuss anything miraculous, nor does he explore the theology behind the writing.  He thinks that has been covered by countless people already.  What he does give you is like a behind-the-scenes exploration which illuminates and educates.  Asimov is highly readable and never lords his massive intelligence over the reader.  He comes off like someone who was so interested in a subject that he researched it profoundly and wants to share the aggregated knowledge the discovered.  To a nerd like me, it is pure gold.  I wish that churches would teach this book along with the actual Bible to better educate people about the kingdoms, times, and people described within.

(To read this book in PDF format, click here: https://archive.org/download/AsimovsGuideToTheBibleTheOldAndNewTestaments2Vols.IsaacAsimov/Asimov's%20Guide%20to%20the%20Bible_%20The%20Old%20and%20New%20Testaments%20(2%20Vols.)%20-%20Isaac%20Asimov.pdf)