This Practical Guide to Texas Mushrooms is a Keeper! 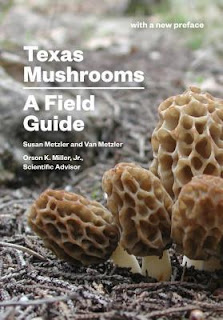 
I have always been fascinated by fungi.  They grow faster than most plants.  They move and grow like animals.  They feed off of decomposing plant matter.  They have an extremely interesting life cycle.  They create fruiting bodies which are by turn delicious, toxic, beautiful, repulsive, smelly, and mind-altering.  Every culture has some sort of tribal history that refers to mushrooms and the fungi in general, for they are found nearly everywhere that humans exist.  They are some of the most important yet ignored parts of the cycle of life on Planet Earth.  Since I am lucky to live in the humid and temperate climate of Houston, Texas, United States, Sol System, Milky Way, Universe, I have access to a huge variety of mushrooms year-round.  While most people go off on excursions in the early morning hours after a good rain, I find mushrooms all around me in the apartment complex my wife and I reside in.  Being around them and spotting them on my daily dog-walks has become a hobby of mine.  Because of this I needed to find a reliable and photographically illustrated guide to the mushrooms of Texas.  After some research, I found out that there are not many such guides for mushrooms in general and definitely not for the specific area of Texas in which I live.


The Metzlers are a couple who have become amateur master foragers of mushrooms in Texas, and understanding that others like themselves needed a good primer for collecting mushrooms in our state, they set out to create just such a book.  It is a perfect book for someone like me, with a basic knowledge of fungi, but with a desire to learn the differences between the different families of mushrooms, and the way to identify which ones are delicious to eat without poisoning myself.  Luckily the amazing M.D. Anderson Library at the University of Houston where I work had this book on the shelves.  I Love Libraries!


Having looked through several different field guides for mushrooms I instantly found this one to be great, both for its ease of use, and for its clear colorful photographs of the mushrooms which allow for far easier documentation and identification.  Their descriptions are stated in a non-technical manner, while at the same time providing the highly-technical language of the mycologists used to designate the different species and sub-species.  To a nerd like me this is as good as it gets.  I will have to make a point to purchase my very own copy of this book for my personal library.  It has inspired me to meet up with the mushroom foragers who hold semi-annual trips to the massive and lush forests of East Texas to search for edible or useful mushrooms and to educate those who attend about the forests, the fungi, and the relationships they hold to the living plants.  The following are two which hold forays around the Houston and Gulf Coast area.

Fungi are nature’s decomposers.  Recently, scientists have been decoding the genomes of various fungi species and have found that they are even more closely related to animals than was originally believed.  They are like some sort of organism straddling the line between plant life and animal life.  Amazing stuff!  The mushrooms and puffballs that we all see above ground are just the fruiting bodies of the mycelium, a web of fungi sometimes acres wide that lives just below the surface of the soil, or the forest floor, or on dead and rotting fallen trees.  Many tree and plant species have relationships with specific fungi, like the morel mushroom, which creates a symbiotic relationship with forest trees like Pine, Poplar, and Oak.  The fungus extracts certain minerals and nutrients and binds them to the soil so that they can then be used by the tree, while the tree helps shield and nurture the mycelium growing underground.
I could go on and on about mushrooms.  I can’t help it.  They are some of the most mysterious life on this planet of ours and most people simply ignore them as they live their lives.  If they think about them at all it is as a food item to add to sauces or steaks or pizza.  I cannot wait to put the knowledge I have gained from this awesome book to practical use.  The state of Texas is in just the perfect location and has such a wide variety of climate within its borders that it is home to more mushroom species than nearly anywhere else in the country.  Both North American and South American species grow here, with an estimated 4,000+ species.  Of those, maybe just over 1,000 have been categorized or are known to the scientific literature.  What a science nerd’s dream it is to discover a new species, and describe it and name it.  I want to live that dream!