What Exactly Did the Ancient Mystics Experience, and Why? 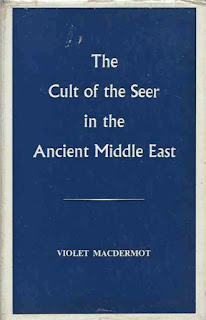 The Cult of the Seer in the Ancient Middle East: A Contribution to Current Research on Hallucinations Drawn from Coptic and Other Texts – Violet MacDermot (1971)

Sometimes I find myself drawn to read a reference work.  I really love reference materials, as they gather and explore a large amount of data into one cohesive book.  I have always enjoyed pouring information into my grey matter and seeing the connections made therein.  Having read quite a few books in the past two years dealing with the rise of worship, the human need for ritual, the neurophysiology of the human brain and how it affects what is called the mystical, and the development of mythology and the mythological basis for all of our religious belief systems, I figured that this book was indeed for me.  In this masterwork, Violet MacDermot has gathered together writings from the Egyptians, the Coptic Christians, the Gnostic Christians and the Hebrews, and seeks to understand the means by which these people enabled, experienced, and interpreted mystic visions/hallucinations.  It is an exhaustive book, and well worth going back to as a reference source.
A book of this scope has many themes to explore.  One of the main ones is the change in mystical visions from the time of the Egyptian ascetics to the Hellenic/Greek times, to that of the early Hebrew mystics and then the Christian saints and martyr seers.  It explores the details of the ritual, religious life of an Egyptian believer, and then details how this differed from the life of the hermit mystic.  During and before the time of the Egyptian kingdoms, the role of ritual and religion was to help the individual understand their place in the larger scheme of things.  This included the general understanding that the divine was to be found in all things, both living and inanimate, and that to serve the greater community was the utmost goal.  The individual themselves is not of primal importance.  They are just a cog in the greater machine.  The gods depended upon the people’s rituals to ensure their endless cycles of birth, death, and rebirth.  Without strict regulations on rituals and religious services, the whole fabric of human society would have crumbled (in their eyes), and the legitimacy of their divine rulers (kings or pharaohs) would be devalued.  MacDermot provides countless examples translated from original source materials to show that the Egyptian devout felt their participation integral to the orderliness of the world around them.  The mystics at this time would do everything the opposite of what was expected from society.  They would remove themselves from the towns and cities, living alone in the deserts.  They would avoid the ritual prayers and ceremonies of the regular folk, and instead focus their whole energies into meditation, fasting, and the attempt to have the soul be rid completely of the trappings of the normal Egyptian world.  Because of this they found divinity in themselves, the full realization of it coming only very near death, as one lets go of this world and the soul moves onto the next.  Instead of ensuring proper mummification so that their body would be reunited with their soul in the afterlife, they sought a total wasting away, allowing their soul to unify with the divine and avoid the endless repetition of birth/death/rebirth.  This would prove to be very influential to the Hellenic, Hebrew, and Christian mystics who came after them.
It seems that every new culture strives to erase the ideas of the past, or at least refute them.  The Greek philosophers did not agree with the Egyptian mystics.  They saw the world as a quite different place, and their mystical visions changed accordingly.  Many of them came to believe that the material world was one of pure degradation, always rotting, always in a state of decline, and that the spiritual world, the world of ideal forms and of the spirit, was one of perfection.  The Hellenic mystics would use many of the same techniques as the Egyptian mystics to bring about ecstatic visions.  Everything from fasting, to physical deprivation, to ritual dance, to chanting, to a secluded desert hermit life was utilized.  Their end goals were different though.  They did not come from a society that demanded everyone adhere to a specific set of ritual. Instead, they lived in a world where the philosophers told them that the divine/ideal was to be reached through pure thought, through philosophy, as it were.  They would meditate on the ideal, seeking to eliminate all thought of the base natural world from their minds.  Even though their aims were different, the visions described and experiences claimed were very similar to those of their predecessors in Egypt.  This continues on through the Hebrew and the early Christian mystical tradition.
After the Egyptians and the Greeks, the mystics of the Hebrew and the early Christian faith were a bit different.  They did not see the world as divinity manifested (Egyptian) or as a shadow of the divine (Greeks), but instead they saw a strict duality of good versus evil.  Many tended to believe in the Manichean thought that the natural world is a wholly evil construct, one in which the body is purely a prison for the divine soul.  Because of this, any and all human activity was derided as either evil, or drawn from evil.  Of course, these activities were merely the residue of the earlier ages of religious thought.  Sex was evil, where before it was a personal experience of divinity.  Orgiastic feasts were evil, where before they allowed the community to share in the bounty that divinity had provided on the Earth.  To the mystic seers even the idea of organized religion was an evil, created on Earth to draw humans away from the truly divine, which could only be achieved by the total obliteration of the self, both physical and mental.  It really is insane how humanity creates its gods and means of worship, and then rails against it at a later time, only to then destroy and rail against the latest religious ideas.

If anything, books such as these that aggregate the religious literature over thousands of years and dozens of cultures go to show the deep schizophrenia that exists in the human mind when it is forced to believe something that is essentially a fairy tale explanation for the way the world appears to us.  Mystics to this day continue on with these self-mortification practices, starving themselves, ingesting hallucinogenic substances, enduring endless pain and discomfort, and separating themselves from the society at large, all to attempt to commune with a non-existent divinity.  So many people have died and suffered at the hands of those that believe their rituals are the true ones, and that any others must be stopped at any cost.  Currently there is a war going on in Islam, between different cults, each claiming they are the one true way to salvation and the divine.  The same thing goes on in Christianity, as the orthodox and the charismatic Pentecostals fight it out in the court of public opinion, as well as in our legislatures.  No one talks about this.  It is a hard subject to broach.  The more one learns about humanity’s religious history, the more one sees how it is all a very carefully constructed house of cards, ready to fall down at any moment, but taking up vast amounts of resources and time from millions of blindly faithful people that could be better served in the betterment of humanity at large.
The best part of this book consists of the translations of source materials that Ms. MacDermot has gathered up.  It is quite amazing to see the literal plagiarism used to prop up the stories about saints and martyrs and mystics.  The people who wrote about the Christian martyrs used the writings about Hellenic mystics as source material, copying nearly every detail.  The Hellenic mystery cult writers did the same thing with the writings of the Egyptians.  So many things are accepted at face value because some learned wise man wrote it down thousands of years ago.  It is ridiculous.  Every new religion has to usurp the rituals and holidays of the ones that came before it, and by doing so, usually turn out to employ the exact same means that were deemed blasphemous or heretic.  The very early Christians followed the rules Jesus gave very strictly.  Jesus said to leave your family, to avoid sex, to not worship idols, to avoid working, to basically stop taking part in society and society’s rituals.  The Christian church however, created “sacraments” to ensure that the masses would still take care of their familial obligations, would still marry and have many children, would still pray to images of saints and martyrs, would still find employment to pay the 10% tithe required by the church, and would continue in their yearly rituals, disguised as Christian holidays (Easter = Ishtar, Christian Saint Feast days replacing those of previous religions, etc.).  In other words, the Church forced its followers to adhere to the very same things that their namesake, Jesus Christ, instructed them to avoid.  If that does not let you know it is all a crock of shit, then perhaps you should read this book and start the exploration for yourself.

(This book is out of print but can be purchased used here: AMAZON  )
Posted by Rob Instigator

This blog is ad-free, and I am not paid by publishers to review any of these books. If you appreciate the reviews consider leaving a PayPal tip -