The Best Book About American Football I Have Yet to Read 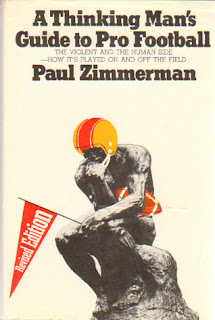 Man, I love NFL football.  I once read an article on the New England Patriot’s coach Bill Belichik which described his vast library of books about football, many of which he inherited from his father who was a head coach at the US Naval Academy for 34 years.  His library contains books on football history, tactics, coaching methods, and training techniques.  I bet he has this book in his library.
The previous book I reviewed was a first-person diary of the life of an NFL offensive lineman during a full season.  This book is told from the vantage point of a sports journalist who has made his career covering the pro football ranks.  Paul Zimmerman is a bit of a legend in sports writing circles (known as Dr. Z for the past couple of decades), since he has first-hand knowledge of the last 50-60 years of pro football.  His writing is always incisive, humorous. and informative.  He rarely veers into sentimentality or nostalgia.  The best part of this book is the detail that Mr. Zimmerman provides regarding the specifics of playing each position on the field.
There are glory players in football.  The receivers, running backs and especially the quarterback are all glamorous, flashy positions, with thousands of words written about every single detail of their practices, and game-day performances.  However, the meat and potatoes of American Football takes place in the trenches, in the pit, in the shit, as players describe it.  This is the collision zone between the offensive and defensive lines.  This is where the fates of the quarterbacks, receivers, and runners hang in the balance.  If the offensive line does not hold, the passes will not be successful.  Either the QB will be rushed in his throw, or he will be crushed by 300lb behemoths coming full speed.  If the offensive linemen do not block properly, the runners can gain neither yardage nor glory.
Because of their anonymity, these linemen seldom get recognition for their work.  They are scorned when they fail an assignment, but rarely are they praised if they did their jobs well.  Mr. Zimmerman goes into great detail about how the different line positions must function, what coaches look for in a player for these positions, and who has been a great player at each position.  His discussions get very specific partly because he was an old offensive lineman in his youth, and partly because these positons are so much more complicated than the average fan understands.  This allowed me to better understand the roles these giant men play as the team seeks victory.
Another area that Mr. Zimmerman sheds light upon is the worlds of the coaches, scouts, and general managers.  The coaches are responsible for game-plans, and tactics.  The scouts have the task of seeking out new talent.  The general managers are the men who make personnel decisions at draft time, trade time, and when the teams have to make the dreaded “cuts.”  Their world is at once simple, and exceedingly complex.  They spend untold hours scrutinizing every last detail of an opponent, watching reel after reel of game film, and then trying to put everything they have learned into a game-plan which they then have to teach to their players.  This happens week in, week out.  It is an exhausting life.
As a lover of pro American Football, the parts of this book that most resonate with me are when I can feel Mr. Zimmerman’s enthusiasm as a fan of these athletes.  The sections where he discusses the greats of the game, or the legendary coaches, or the early stars of the sport all fill me with a deep admiration for the men who helped create this game which I so love now.  The final chapter of this book is dedicated to the player whom Mr. Zimmerman, as well as many others, considers the greatest football player they ever saw.  That would be Mr. Marion Motley, a monster fullback who also played offensive line and defensive linebacker.  The only person who could compare is the great Jim Brown, who played almost a decade later.  Mr. Brown did not play both ways though, and was not feared as a maniacally powerful hitter.  The old days when the players played both ways will never come again, but they still inspire.
A few years ago Mr. Zimmerman suffered a series of bad strokes which caused him to lose his ability to speak, and much control of his body.  He had to stop writing.  He lives with his wife (who he would affectionately refer to as “the Flaming Redhead” when he mentioned her in his columns) and has had to go through rounds of physical therapy.  He may never again regain his ability to speak or write, but he has given the world decades worth of high-quality writing and analysis.  He has written several books.  He has shared his deep passion for the sport with all of us lucky fanatics.  Thank you Dr. Z.