A Year in the Life of an NFL Offensive Lineman 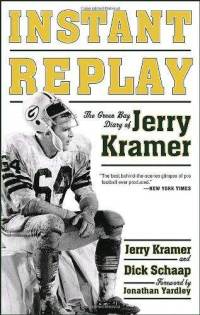 
(*side note, in 2006 I drove by myself to Canton OH to see my old Oiler’s QB Warren Moon get inducted into the Pro Football Hall of Fame alongside other greats.  The day after the ceremonies, I headed to the Cracker Barrel to go get some breakfast and who should I be sitting next to but the great one himself, Mr. Bart Starr and his wife enjoying some fried eggs.  It was like eating with royalty for me.  I did not bother the man, but wow.)
Now I am hooked on reading books about American Football.  I hope they are all this great.  Mr. Jerry Kramer went on to have a great career as a TV analyst for games, and wrote one other book also.  I am glad he wrote this one.  As he describes in the end, the one thing he would miss upon leaving the game would be his teammates, his coaches, the people who he lived and fought and suffered with.  That is what brought him back year after year.