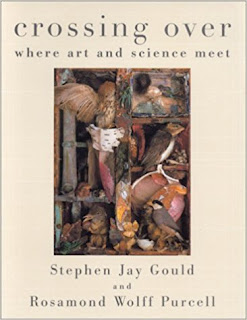 Art and Science, my two most favorite subjects of human intellectual experience, are always conflated in my brain.  Art IS science to me and science IS art, in that the exploration of idea in Art mirrors the exploration of fact in science, and in how the creative impulse of the human brain is equally critical to the scientific method as it is to artistic creation.  These are not two separate worlds, and Stephen Jay Gould makes sure to repeat this refrain.  In choosing to write essays based upon the intricate and scientifically-informed photographs of Rosamond Wolff Purcell, Mr. Gould lets his mind roam, drawing from both his experience in the sciences and his love of the arts, creating connections which are otherwise unnoticed.

I love books like this.  Some of my favorite photographers work in the manner of Wolff Purcell.  She searches the sometimes-forgotten archives of museums and institutes for items to add to her imagery, creating beautiful photographs which function as a work of modern art while also drawing the critical intellect to explore the subject matter empirically, as a scientist would.  Mr. Gould uses the images chosen, one or two per essay, and then riffs upon what the artwork makes him think of.  Sometimes it is an exploration of the affinity humans have for bilateral figures over radially symmetrical figures, and at other times he describes the deluded and self-righteous work of the person whose collection is being photographed.  It is whatever comes to his fertile mind.  Many of these images contain fossils, and as a paleontologist, Stephen Jay Gould has an instant affinity with them.

In one essay, following an image of a painting in mid-restoration showing a “correction” once made to reduce the painting’s lewdness but now removed to show the original offense, he describes the concept of “layering.”  This concept is evident in medicine, where most of the disease and infirmity occurs invisibly, under the skin.  So many medical breakthroughs have been solely methods by which to look under the skin, such as the X-Ray, CAT scans, Magnetic Resonance Imaging, etc.  In an essay following a photo of an old disused fish fossil, Mr. Gould describes the concept of an “overlay.”  This is the idea that a thing (1) must be older than another thing (2) if the first thing overlies or modifies the second thing in a manner implying the original presence of thing (1) alone.  For example, you have a photo of yourself.  You spill some ketchup on it and it dries, then a while later, part of it gets torn right where the ketchup was, then even later, someone puts a piece of tape over it all to keep it from tearing further.  Someone presented with the final object could safely deduce that the tape was younger than the tear, which was younger than the ketchup, which was younger than the photograph.  Geology works very much in this manner to differentiate between sedimentary layers.

This is actually the third such book in this series.  I am going to have to request the other ones through the Inter-Library Loan system here at the University of Houston’s M.D. Anderson Library.  They will make for some very thought-inducing reading!  Bad ass.

(This book can be purchased here: Crossing Over  )
Posted by Rob Instigator